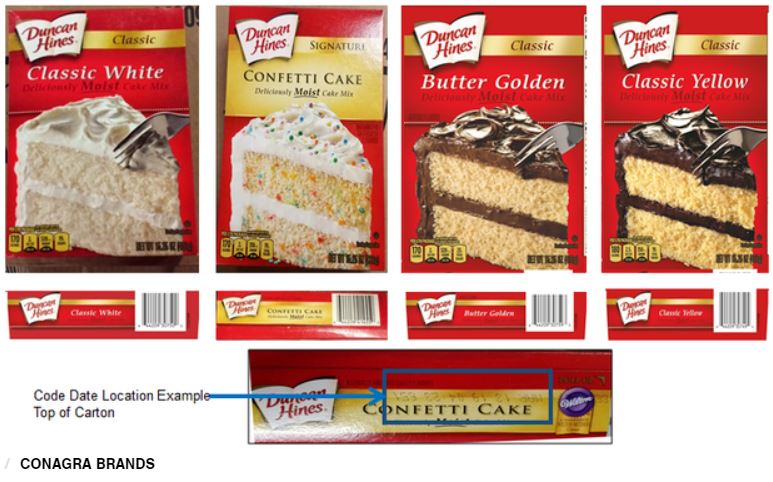 Some 2.4 million boxes of Duncan Hines cake mixes are being recalled nationwide after one flavor tested positive for salmonella, according to federal health officials and Conagra Brands, the food conglomerate that recently purchased the popular cake brand.

The Centers for Disease Control and Prevention has received reports of five illnesses, according to the Food and Drug Administration. Reports of additional illnesses are expected due to time lags between when an illness occurs and when the CDC receives confirmed lab results.

“The FDA is investigating the manufacturing facility that made recalled Duncan Hines cake mixes,” an announcement posted late Monday by the agency stated. “FDA and the CDC informed Conagra Brands that a sample of Duncan Hines Classic White Cake Mix that contained Salmonella Agbeni matched the Salmonella collected from ill persons reported to the CDC. This was determined through Whole Genome Sequencing, a type of DNA analysis.”

The CDC is interviewing people sickened by the salmonella bacteria to determine if they’d eaten Duncan Hines cake mixes before getting sick. “Several of the individuals reported consuming a cake mix at some point prior to becoming ill, and some may have also consumed these products raw and not baked,” the recall notice stated.

“While it has not been definitively concluded that this product is linked to the outbreak and the investigation is still ongoing, Conagra has decided to voluntarily recall the specific Duncan Hines variety identified, Classic White, and three other varieties — Classic Butter Golden, Signature Confetti and Classic Yellow — made during the same time period out of an abundance of caution,” the recall noticesaid.

Consumers with questions can call Conagra at 888-299-7646 or visit www.duncanhines.com.

Conagra said in June it would purchase Pinnacle Foods — the Chicago company behind the Duncan Hines brand — in a deal valued at about $10.9 billion. Conagra, whose wide array of products include Orville Redenbacher and Chef Boyardee, generates nearly $8 billion in annual revenue.