68 years after soldier went off to Korean War and vanished, his son gets a surprise call

North Korean leader Kim Jong Un fulfilled an agreement he made with President Trump at the Singapore summit in June to return 55 boxes of remains of Americans killed in the Korean War.

It’s only a tiny fraction of the nearly 5,300 still missing, but for at least one family it provided closure.

A faded photo is one of the few memories Charles McDaniel has of his father. He was just three years old when Master Sgt. Charles McDaniel went off to the Korean War and vanished without a trace.

“He disappeared from history. I mean he was just gone. He wasn’t dead. He wasn’t a POW that was listed. He was gone,” Charles told CBS News correspondent David Martin.

He was a medic in an army battalion overwhelmed by Chinese troops at the Battle of Unsan in North Korea on November 2, 1950.

“They lost 600 and something people in one night….the Chinese came in around them, surrounded them and just overran the battalion headquarters,” Charles said.

His wife Gladys and her two sons never knew what happened to him, but when he didn’t come home with prisoners of war, he was officially declared dead, a fact which slowly registered with Charles as he grew.

“I remember all of a sudden as a little boy starting to cry. I was inconsolable,” he said.

He became an army chaplain and searched military archives for his father’s service records but found no clues to his fate. Then, North Korea turned over 55 boxes of remains following the Singapore summit.

“Fifty-five boxes come back. That’s one percent of the missing in action. So I’m figuring at best there’s a one percent chance that my father’s remains are there,” Charles said.

But then, as he revealed at a ceremony in Hawaii honoring the missing, he got a call from an Army official.

“He said. ‘I have some amazing news for you, we found one dog tag, one dog tag. And it’s your father’s,” Charles said at the ceremony.

Eaten away by rust but still legible, his father’s name and blood type. With the dog tag in hand, it didn’t take long for the forensics lab in Hawaii to identify McDaniel’s remains using DNA and dental analysis. 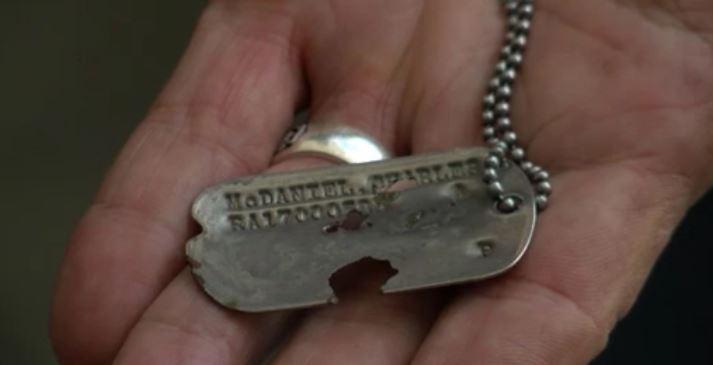 Charles and his younger brother Larry asked for a moment alone with their father’s remains.

“I just put my hand on my father’s skull, head, and said a little thank you prayer to God that even to have this, it’s more than I ever expected honestly….blessed is the word I would use. Fortunate God’s grace has somehow allowed this to happen.” he said.

Master Sgt. McDaniel disappeared from history 68 years ago, but now he’s found. His remains will be returned this week to his family in Indiana for burial with full military honors.