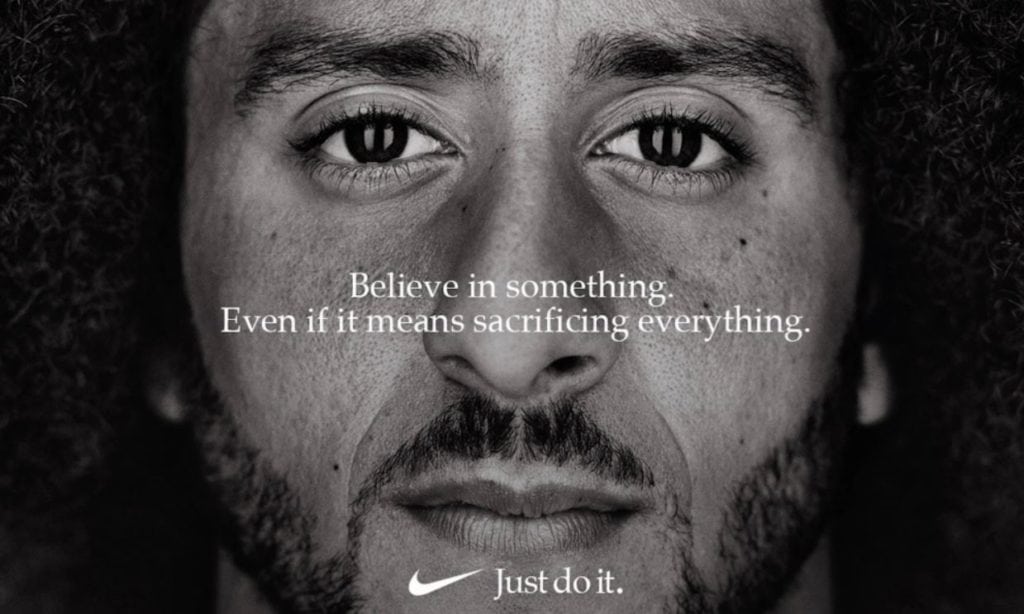 Nike’s new ad campaign featuring Colin Kaepernick, known for kneeling during the national anthem to bring attention to racial injustice, appears to have scored a touchdown with customers.

From September 2 through September 4, online sales of Nike gear jumped 31 percent — that’s nearly double the company’s sales during same period a year ago, according to Edison Trends, a digital commerce research company.

“There was speculation that the Nike/Kaepernick campaign would lead to a drop in sales, but the data does not support that theory,” the company said in an email.

To be sure, the figures don’t include sales at brick-and-mortar stores. But the digital sales boost may indicate that Nike’s strategy is paying off by appealing to its core customers, who tend to be younger and more diverse than the types of consumers who were angered by Kaepernick’s participation in the campaign.

Nike announced the ad on Monday, Labor Day, leading some consumers to destroy their Nike shoes, as well as a boycott. President Donald Trump, a frequent critic of NFL players who kneel during the anthem, criticized the apparel company on Twitter on Friday, writing, “What was Nike thinking?”

What was Nike thinking?

Nike, whose shares have dipped during the brouhaha, is making a calculated gamble, marketing experts say. The company is embracing activism and racial justice at a time when shoe manufacturers can no longer avoid the nation’s political division. After years of building billion-dollar brands around sports celebrities, sports apparel makers have become flashpoints in the political, racial and cultural clashes surrounding the Trump administration.

Nike took this route as its biggest representatives, including NBA star LeBron James and tennis champ Serena Williams, have spoken out about police shootings of African-American men and problems facing the black community.

Those same athletes are increasingly using their shoes as a form of expression. James’ “Equality” Nike signature shoe was unveiled earlier this year, with the word emblazoned across the back of the shoes. The Golden State Warriors’ Stephen Curry has worn a Barack Obama-themed shoe.

NBA players in recent years have also worn shoes with messages that say “R.I.P. Trayvon Martin” and “Sideline Racism,” as well as images of Ebenezer Baptist Church, where the Rev. Martin Luther King Jr. preached. Such statements could become more common in the next season after the NBA relaxed the rules over the types of shoes players can wear.

“I stand with Nike, every day, all day,” James said Tuesday at a Nike fashion show and awards ceremony in New York.

While companies were once shy about straying into politics, Nike and others are now dipping into the fray — even if it means alienating Trump supporters and intertwining shoes and politics.

Many companies “feel the need to align with players, because players help them move the product,” said Michael Lewis, director of the Marketing Analytics Center at Emory University in Atlanta.

Nike has likely figured out that its core consumers — the people who regularly buy its sneakers and clothes — are mostly the millennials and minority youth who already support Kaepernick or at least don’t mind the stance he is taking, said Antonio S. Williams, who teaches sports marketing at Indiana University.

© 2018 CBS Interactive Inc.. All Rights Reserved.
Copyright 2022 Scripps Media, Inc. All rights reserved. This material may not be published, broadcast, rewritten, or redistributed.