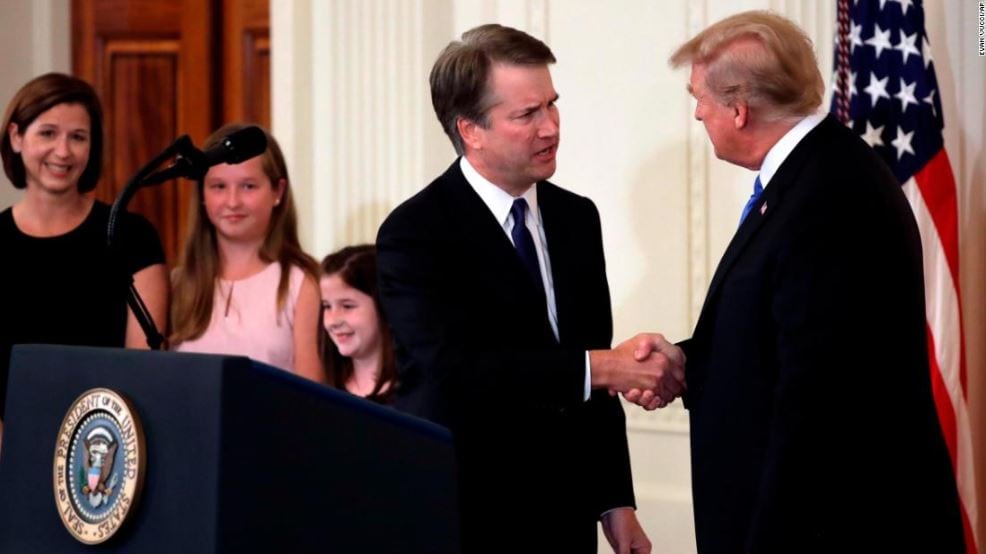 The confirmation battle over Brett Kavanaugh, President Donald Trump’s pick to fill the Supreme Court vacancy created by retiring Justice Anthony Kennedy, is set to intensify when hearings on his nomination start Tuesday before the Senate Judiciary Committee.

Kavanaugh, 53, currently serves as a judge on the powerful US Court of Appeals for the District of Columbia Circuit. Here’s where he stands on some hot-button issues:

Republican Sen. Susan Collins of Maine told reporters in August that Kavanaugh informed her that he considers Roe v. Wade, the landmark Supreme Court ruling that legalized abortion nationwide, to be settled law.

Kavanaugh has not expressed outright opposition to Roe v. Wade. In 2006, Sen. Chuck Schumer of New York, now the Senate Democratic leader, pressed Kavanaugh on his personal opinion about Roe, but he declined to answer, saying, “I don’t think it would be appropriate for me to give a personal view on that case.” The exchange took place during a hearing to consider Kavanaugh’s nomination to serve on the DC circuit.

Kavanaugh did say, however, that if he became a judge on the circuit court, he would uphold Supreme Court precedent with respect to Roe. “If confirmed to the DC Circuit, I would follow Roe v. Wade faithfully and fully. That would be binding precedent of the court. It has been decided by the Supreme Court,” he said at the time. (The Supreme Court, of course, can overturn its previous decisions.)

Because Kennedy was a swing vote in favor of abortion rights, his departure from the court has sparked alarm among abortion rights activists that Roe v. Wade could be overturned. In addition, Trump has long vowed to appoint justices who would reverse Roe and allow the states to determine whether abortion should be legal.

One of Kavanaugh’s opinions likely to draw scrutiny from senators is his dissent from a ruling of the DC Circuit last October that an undocumented immigrant teen in detention was entitled to seek an abortion.

In his dissent, Kavanaugh wrote the Supreme Court has held that “the government has permissible interests in favoring fetal life, protecting the best interests of a minor, and refraining from facilitating abortion.” He wrote that the high court has “held that the government may further those interests so long as it does not impose an undue burden on a woman seeking an abortion.” He said the majority opinion was “based on a constitutional principle as novel as it is wrong: a new right for unlawful immigrant minors in US government detention to obtain immediate abortion on demand.”

Democrats are likely to make Kavanaugh’s views on presidential power a focus of the hearings.

In a 2009 Minnesota Law Review article, Kavanaugh wrote that “Congress might consider a law exempting a President — while in office — from criminal prosecution and investigation, including from questioning by criminal prosecutors or defense counsel.” In the same article, however, he noted, “If the President does something dastardly, the impeachment process is available.”

Kavanaugh said back in 1999 that the landmark Supreme Court opinion that ordered President Richard Nixon to turn over White House recordings toward the end of the Watergate investigation might have been “wrongly decided.”

The comments were part of an interview in Washington Lawyer magazine. Reached for comment, the White House pointed to a more recent speech in which Kavanaugh praised the 1974 opinion in United States v. Nixon, which set a key precedent limiting presidential claims of executive privilege.

Kavanaugh has demonstrated a deep suspicion of government regulation, a pattern aligned with the Trump administration and perhaps best exemplified by his dissent in the case of a killer whale that attacked a SeaWorld trainer.

As Kavanaugh criticized a Labor Department move to sanction SeaWorld following the drowning of a trainer by the orca Tilikum, he declared that the agency had “stormed headlong into a new regulatory arena” and warned that regulators would try to impose new safety requirements on sports, the circus and more.

Overall, his view is that agencies should exercise authority as clearly spelled out in federal statutes and that judges should not, as occurred in the SeaWorld case, defer to agency interpretations that go beyond what’s explicit in a law.

In opinions and speeches, Kavanaugh has questioned a ruling in a 1984 Supreme Court case, Chevron v. Natural Resources Defense Council, that said judges should defer to agency interpretations of ambiguous laws. That, he said in a 2017 speech, “encourages agency aggressiveness on a large scale.”

Kavanaugh’s opinion in a case involving a challenge under the Religious Freedom Restoration Act to the Affordable Care Act’s so-called contraceptive mandate, Priests for Life v. HHS, has also drawn scrutiny. In a dissent, he expressed sympathy for the religious challengers. Making reference to the Supreme Court’s ruling in Burwell v. Hobby Lobby, he wrote that “the regulations substantially burden the religious organizations’ exercise of religion because the regulations require the organizations to take an action contrary to their sincere religious beliefs.”

In a line that has attracted some conservative criticism, however, Kavanaugh also wrote in his dissent that Supreme Court precedent “strongly suggests that the government has a compelling interest in facilitating access to contraception for the employees of these religious organizations.”

When a lawsuit challenging the Affordable Care Act reached Kavanaugh’s Washington appeals court in 2011, he was careful not to commit and did not vote on the merits of the case.

Kavanaugh dissented from the 2-1 ruling in favor of the 2010 law known as Obamacare. He said judges had no jurisdiction at that point to resolve the merits of the dispute.

He described the law requiring people to buy health insurance as “unprecedented” and the breadth of the Obama administration’s defense of it “jarring.” But at the same time, Kavanaugh said judges “should be wary of upending” Congress’ effort to help provide Americans with quality health care.

In 2011, Kavanaugh dissented from a majority opinion of the DC Circuit that upheld a ban that applied to semiautomatic rifles in the District of Columbia.

In his dissent, he wrote that the Supreme Court had previously “held that handguns — the vast majority of which today are semiautomatic — are constitutionally protected because they have not traditionally been banned and are in common use by law-abiding citizens.”

Citing a previous high court ruling, Kavanaugh went on to say, “It follows from Heller’s protection of semiautomatic handguns that semiautomatic rifles are also constitutionally protected and that DC’s ban on them is unconstitutional.”

In 2015, Kavanaugh wrote an opinion defending the US government’s controversial metadata collection program, in part citing national security considerations. He wrote that the program “is entirely consistent with the Fourth Amendment,” which protects against unreasonable search and seizure.

He wrote that the program “does not capture the content of communications, but rather the time and duration of calls and the numbers called,” and said it “serves a critically important special need — preventing terrorist attacks on the United States.” Kavanaugh argued “that critical national security need outweighs the impact on privacy occasioned by this program.”

In a 2017 dissent, Kavanaugh said he believed that Obama-era net neutrality regulations were “unlawful” and wrote that the policy violated the First Amendment.

At issue were rules approved by the Federal Communications Commission in 2015 to more strictly regulate the Internet. The rules, based on the principle of “net neutrality,” were intended to provide equal opportunity for Internet speeds and access to websites. In a May 2017 order, a majority of the DC Circuit declined to review an earlier decision siding with the FCC. Under the Trump administration, the FCC has since moved to dismantle the regulation.

Kavanaugh wrote in his 2017 dissenting opinion that the regulation was consequential and “transforms the Internet.” But he said the rule “impermissibly infringes on the Internet service providers’ editorial discretion,” and he suggested the FCC had overreached in issuing the regulation. “Congress did not clearly authorize the FCC to issue the net neutrality rule,” he wrote.