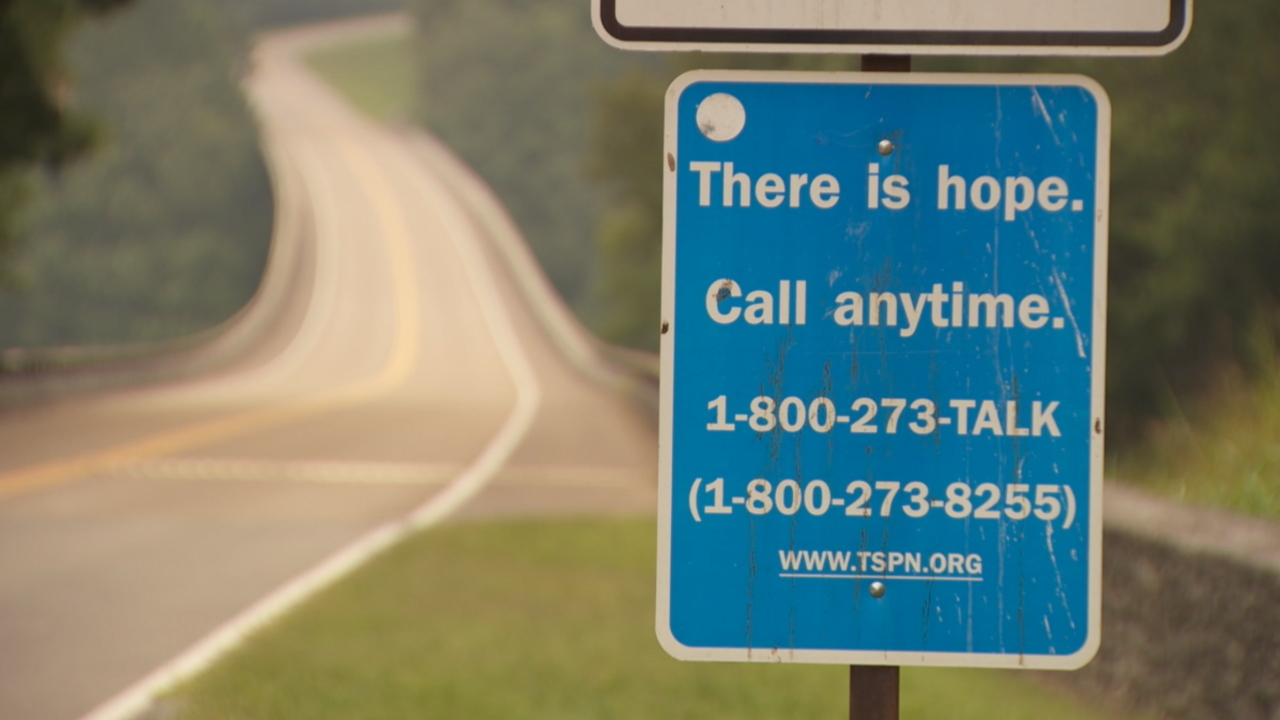 As part of a National Park, the Natchez Trace Parkway Bridge in Williamson County, Tennessee is a beautiful architectural sight for many. But for some, it’s become a place of pain and grief.

“I lost my sister, who was 25, to suicide at the bridge,” Sarah Elmer says.

Trish Merelo shares Elmer's grief. She, too, lost a family member to suicide.

Now, Elmer and Merelo have come together over a mutual understanding of how it feels to lose somebody who has died by suicide.

“Seeing what a young suicide does to a school, and to a community, and to a neighborhood, and to a family, it’s unimaginable grief,” Merelo says.

Merelo’s son, John, was a senior in high school. He was academically gifted and in marching band. His mom describes him as somebody whose heart would make a difference in this world.

Elmer’s sister, Danielle, was a mother of two. Elmer describes her sister as smart, caring, and a big mental health advocate.

“Now that’s she’s gone, I just don’t have my other half,” she says.

The two women are now doing everything they can to prevent other families from feeling the same sorrow. Together, they’ve formed the Natchez Trace Bridge Barrier Coalition.

Their goal is to create an 8-foot barrier on the bridge, so it’s not so easy for someone to jump. Until then, they’re thankful for the new call boxes that were recently planted on the bridge by the National Park Service. The call boxes offer a direct line to 911 and the Tennessee crisis number.

“I think the crisis line is more for someone who is in that place and needs that counseling," Merelo says. "I think 911 is for them too, but that’s also for bystanders who see someone in trouble and want to get authorities here."

With barely any cell service in the area, the women say the call boxes are essential, and they hope they’ll make a big difference for people in need.

“If that call box saves one life, then it is worth it,” Elmer says.

Letting somebody know they’re loved and cared for is a critical message everyone needs to hear. On the Natchez Trace Parkway Bridge, you can pick up the phone for support. But what if you were walking along, and you came across a mental-health first-aid kit? What if you had something you could physically hold onto? That’s where Find Your Anchor comes in.

“Find your anchor is a grassroots movement aimed at suicide awareness and prevention,” Find Your Anchor CEO Ali Borowsky explains. “It all kind of manifests itself into these little blue boxes that we launch into the world. So, you’re walking down the street, you see this little blue box, you open the lid, it says ‘If you’re feeling lost, hopeless, suicidal, this is for you. If not, leave it for someone else in need.’”

Find Your Anchor is based out of Orange County, California, but boxes have reached places all across the globe. The boxes can be requested by people in need, ordered by mentors who want to help people in need, or launched in a public place for somebody to find. Borowsky says she thinks launching them organically into the world, is the most powerful way for somebody to encounter a box.

“It’s like a message from the universe," she says. "Like ‘I was meant to find this, this was put here for me.’”

The box holds multiple items to give people hope: a deck of cards titled “52+ reasons to live”, a bracelet, an infographic on depression, a sticker, a couple posters, some cards on how to become a messenger, and a list of resources.

Borowsky felt inspired to create Find Your Anchor, after her own struggles with mental health. She attempted to take her life multiple times. Now, she's helping others who may be in a dark place.

Keeping track of each individual box, Borowsky says she’s received notes from many people saying the box has saved their life. And that’s why more and more mental health advocates are standing behind Find Your Anchor.

“I like the find your anchor box because it’s empowering the individual immediately, and yet provides resources for them if they need more than just the box,” Amanda Greene says.

Greene says she can’t stop ordering Find Your Anchor boxes, because she understands their powerful impact.

“Living with chronic illness and having it for a long time, there’s days where you’re like ‘OK, I’m done,’” she says.

As soon as the people receiving boxes are in a better place, they’re encouraged to pass it on, adding an item that was an anchor for them.

Whether it’s a phone call on the top of a bridge, or a box by the beach, what’s most important for people to realize, is that they’re not alone, they’re loved, help is available, and there is hope.

“My core belief in the height of my darkness was that no one would care," Borowsky recalls. "If we can help convince you that strangers care about you, then it shouldn’t be so hard to feel that your family and friends do as well."

“If you are suicidal, there is help. And I encourage you to reach out,” Elmer says.

If you’d like to reach out to the journalist for this story, email Elizabeth Ruiz at elizabeth.ruiz@scripps.com