CHEYENNE, Wyo.- With the first results coming into elections offices throughout the state, early numbers show Republicans are holding their offices in the races in Congress. 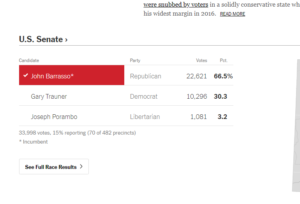 In the race for governor, Mark Gordon, the current state treasurer, is also projected to defeat Mary Throne, a former Democratic minority leader in the state House of Representatives.

Incumbent Wyoming Rep. Liz Cheney is winning with early numbers in and a 62.3% margin against Democrat Greg Hunter.

Below Liz Cheney sent the following statement following her reelection victory to serve Wyoming in the U.S. House of Representatives.

“I’m honored by the trust the people of Wyoming have again placed in me to serve as their Representative in Congress, and I thank my opponents for their willingness to participate in our political process. I am grateful for all of the volunteers who worked on behalf of our campaign. Now that the election is over, we must keep our promises, fight to restore America’s power in the world and protect the strength of the economy for our families, workers, ranchers, industries and every one of our citizens. Serving alongside Senators Barrasso and Enzi and now Governor-elect Mark Gordon on behalf of Wyoming is more than a privilege, it is a charge to uphold. I will never stop fighting for our beloved state.”