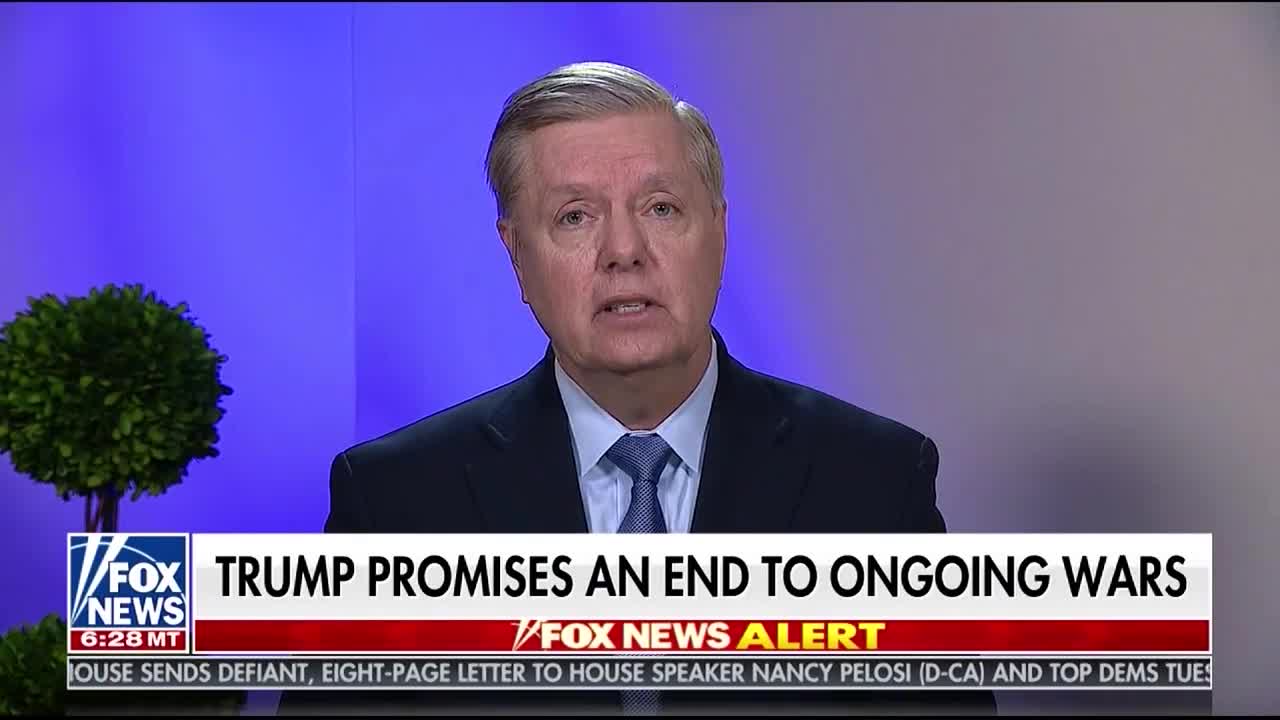 Republicans savaged President Donald Trump Wednesday for allowing Turkey to attack US allies in Syria as the President offered varying reasons for giving Turkey the green light, including the fact that Kurds did not fight alongside the US in World War II.

Turkey launched its military operation to flush Kurds allied with the US out of northeastern Syria sparking outrage in Congress, creating rare bipartisan unity about the risks to the Kurds, US national security interests, regional stability and the fight against ISIS.

Trump apparently gave Turkish President Recep Tayyip Erdogan the go-ahead on Sunday to proceed with his long-planned move against Kurdish fighters who make up part of the Syrian Defense Forces and who lost thousands of men fighting with the US against ISIS.

As Turkish planes pounded Kurdish positions from the air and with artillery, CNN reporters on the ground in Syria reported smoke billowing from several large explosions as desperate civilians -- women, children and men -- fled the area on foot, some pushing others in wheelchairs, many crammed into the back of pickup trucks.

With humanitarian groups reporting the bombardment could displace as many as 300,000 people, Erdogan's top adviser told CNN's Christiane Amanpour that Trump knew in advance about the scope of the Turkish attack.

The news trickling out of Syria fed increasing Republican anger, as lawmakers, former officials and analysts reacted throughout the day, and the US military stayed conspicuously silent.

"News from Syria is sickening," Rep. Liz Cheney of Wyoming, the third-ranking Republican in the House, tweeted Wednesday, echoing lawmakers across the spectrum. "Turkish troops preparing to invade Syria from the north, Russian-backed forces from the south, ISIS fighters attacking Raqqa. Impossible to understand why @realDonaldTrump is leaving America's allies to be slaughtered and enabling the return of ISIS."

Florida Republican Sen. Marco Rubio noted that "at request of this administration the Kurds served as the primary ground fighters against ISIS in Syria so U.S. troops wouldn't have to." Then, he charged, the administration "cut deal with Erdogan allowing him to wipe them out. Damage to our reputation & national interest will be extraordinary & long lasting."

Republican Sen. Lindsey Graham of South Carolina and Democratic Sen. Chris Van Hollen of Maryland on Wednesday announced a framework to place immediate sanctions on senior Turkish government officials, ban all US military business and military transactions with Turkey, and immediately activate 2017 sanctions on the country until Ankara stops its operations against the Kurds.

"This unlawful and unwarranted attack against an American friend and partner threatens the lives and livelihoods of millions of civilians, many of whom have already fled from their homes elsewhere in Syria to find safety in this region," Graham and Van Hollen said in a statement.

"This invasion will ensure the resurgence of ISIS in Syria, embolden America's enemies including Al Qaeda, Iran, and Russia, and launch yet another endless conflict in what had been, until today, one of the most safe and stable areas of Syria and a region experimenting with the best model of local governance currently available in that war-torn country."

Brad Bowman, senior director of the Center on Military and Political Power at the Foundation for Defense of Democracies -- a veteran with 15 years active duty service -- reflected the sentiment of many other Republicans CNN spoke with, describing the day as "a sickening and shameful moment in US history and I put that at the foot of the President."

Both Pentagon and State Department officials had advised Trump against making the move, arguing a US presence is needed to counter ISIS and keep Iran and Russia, both influential inside Syria, in check.

Syrian Democratic Forces said in a statement Wednesday that they were suspending military operations against ISIS in northern Syria following the "Turkish aggression."

On Sunday, after Trump's phone call with Erdogan, the White House said US troops would move out the way and would not support or be involved in the operation. Trump downplayed Turkey's move in comments to reporters at the White House Wednesday.

He shrugged off the likely escape of ISIS fighters from Kurdish prisons, essentially saying it is Europe's problem, not his. "Well, they're going to be escaping to Europe, that's where they want to go," Trump said. He added that "we have no soldiers in the area."

Trump downplayed the alliance with the Kurds, 11,000 of whom died fighting to help the US mission against ISIS. "They didn't help us in the second World War, they didn't help us with Normandy for example," Trump said. "They're there to help us with their land, and that's a different thing." Normandy is an area of France, not the US.

Secretary of State Mike Pompeo said Wednesday that it was "false" that the US withdrawal of troops from northeastern Syria was a green light for the slaughter of the Kurds, but did not explicitly endorse them as US allies.

Analysts such as Bowman say part of the outrage is driven by the fact that "we would have not defeated ISIS' Caliphate ... without their help" and that the Kurds had just recently lowered their defenses, trusting the US to protect them from Turkey.

Since August, the US has been pushing the Kurds to dismantle their defensive fortifications and pull back their troops along the border that Turkey is now attacking as part of a "security mechanism" framework. The goal was to appease Turkey enough so they wouldn't invade. Kurds agreed to participate "presumably because they trusted the US to restrain the Turks diplomatically," Bowman said.

"We are breaking faith with the Kurds," Bowman said. "The SDF did everything we asked them to do. This will have ramifications for every individual soldier, every squad, every platoon operating in a dangerous place trying to earn the trust of their partners."

Earlier Wednesday, Trump took angrily to Twitter to push back on criticism. The President appeared to reference the 2003 invasion of Iraq, which was premised on faulty and manipulated intelligence that former leader Saddam Hussein had weapons of mass destruction.

"There were NONE!" Trump tweeted. "Now we are slowly & carefully bringing our great soldiers & military home. Our focus is on the BIG PICTURE!"

But analysts and lawmakers of all stripes argue that the big picture and benefits to the US of standing its ground are exactly what Trump is missing. They pointed to the ramifications for future US alliances and the fight against ISIS, which remains a threat, among other issues.

They said the move was strategically shortsighted in Syria and internationally, that it will lend credibility to the narrative -- often pushed by Iran and Russia -- that the US is an unreliable partner making it harder to build future coalitions. That could mean that the US may have to send its own forces into harm's way more often.

"People will come to see the United States as untrustworthy or transactional," Bowman said. "The net result is that the next time we need friends allies partners, they won't be there."

Republican Sen. Mitt Romney of Utah pointed to the sense that once Trump pulled the US back, the Turkish attack was inevitable.

"Reports indicate Turkey is predictably attacking the Kurdish allies we abandoned," Romney tweeted. "It's a tragic loss of life among friends shamefully betrayed. We can only hope the President's decision does not lead to even greater loss of life and a resurgence of ISIS."

The wave of criticism -- including from a usually acquiescent Republican Party and in particular from some staunch Trump allies -- seemed to sting the President into damage control mode. On Wednesday afternoon, he released a statement that did not mention his role in giving Erdogan the green light or the fate of the Kurdish fighters.

"From the first day I entered the political arena, I made it clear that I did not want to fight these endless, senseless wars—especially those that don't benefit the United States," Trump said.

Trump said Turkey had "committed to protecting civilians, protecting religious minorities" and "ensuring no humanitarian crisis takes place," and said Ankara "is now responsible for ensuring all ISIS fighters being held captive remain in prison and that ISIS does not reconstitute in any way, shape, or form."

Graham, usually a stalwart Trump ally, is predicting his sanctions legislation on Turkey will have a veto-proof majority in the Senate, making it impossible for Trump to stop.

Trump responded to talk of the bipartisan legislation saying "Lindsey and I feel differently."

"I think Lindsey would like to stay there for the next 200 years and maybe add a couple a hundred thousand people every place. But I disagree with Lindsey on that. But I will tell you that I do agree on sanctions."

Trump claimed he has stopped Erdogan from moving into Syria "from virtually the first day" he was in office. "They wanted to fight, and that's the way it is," Trump said.