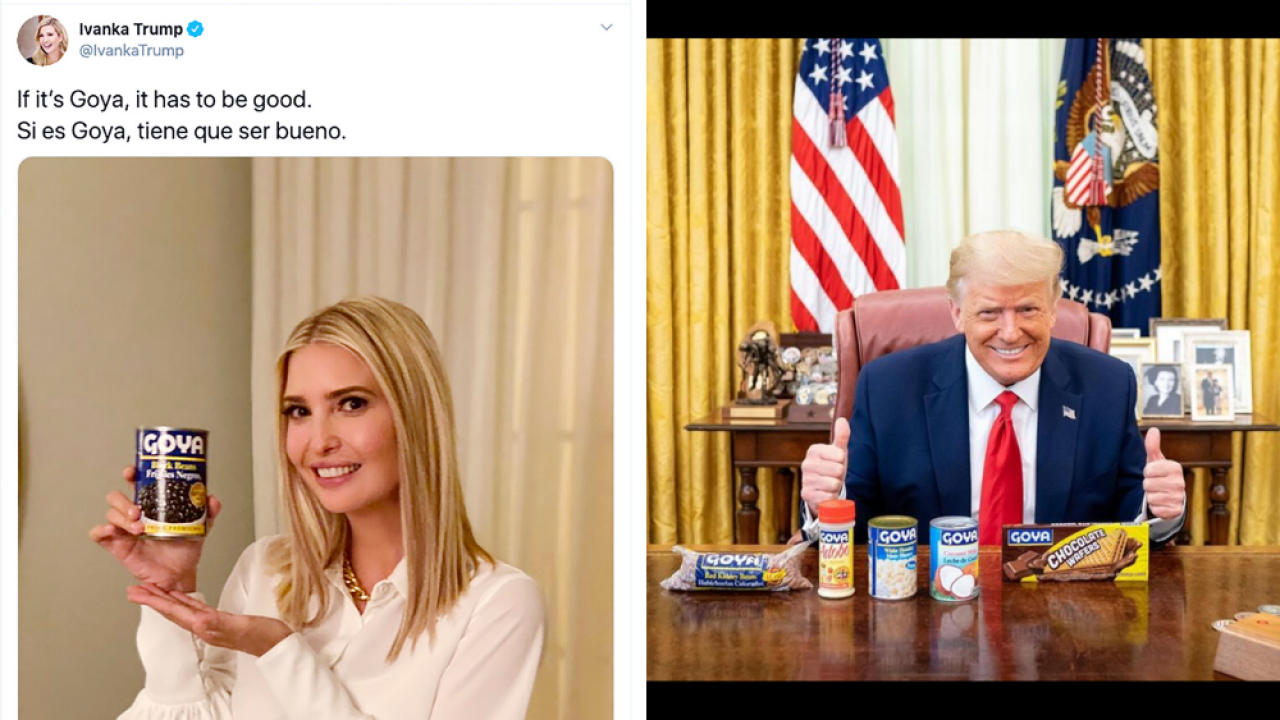 Ivanka Trump and her father, President Donald Trump, both appeared to endorse Goya foods in possible violation of ethics rules in July 2020.

President Donald Trump appeared to endorse Goya food products in an Instagram post on Wednesday, days after comments at the White House from the company's CEO prompted calls for a boycott of the maker of several Latin American staple foods.

The photo, posted to Trump's official Instagram account, shows Trump smiling and flashing a thumbs up from the Oval Office as several Goya products sit atop the Resolute Desk.

It's the second time Trump has used his Instagram page to promote Goya. On Friday, Trump posted a graphic that simply read "I ❤️ Goya."

Trump's photo from the Oval Office came hours after his daughter and Senior Advisor to the President Ivanka Trump, posed for a photo with a can of Goya beans in a photo shared to Twitter.

"If it's Goya, it has to be good," Ivanka Trump wrote, along with the slogan's Spanish translation.

If it’s Goya, it has to be good.
Si es Goya, tiene que ser bueno. pic.twitter.com/9tjVrfmo9z

"We are all truly blessed to have a leader like President Trump," Unanue said.

Unanue's praise of the president prompted swift backlash from some of Goya's many Latin American customers. In the hours after Unanue's comments, the hashtags #Goyaway and #BoycottGoya were trending on Twitter.

Trump has faced criticism for his rhetoric towards Latin Americans since the day he announced his candidacy in 2015, when he referred to Mexican immigrants as "rapists."

Ethics regulations prevent executive branch employees from using their office for personal gain or to "endorse any product, service or enterprise for the private gain of friends or relatives."

In 2017, Counslor to the President Kellyanne Conway was "counseled" by the White House after she encouraged viewers to buy products from Ivanka Trump's clothing line during an interview with Fox News.