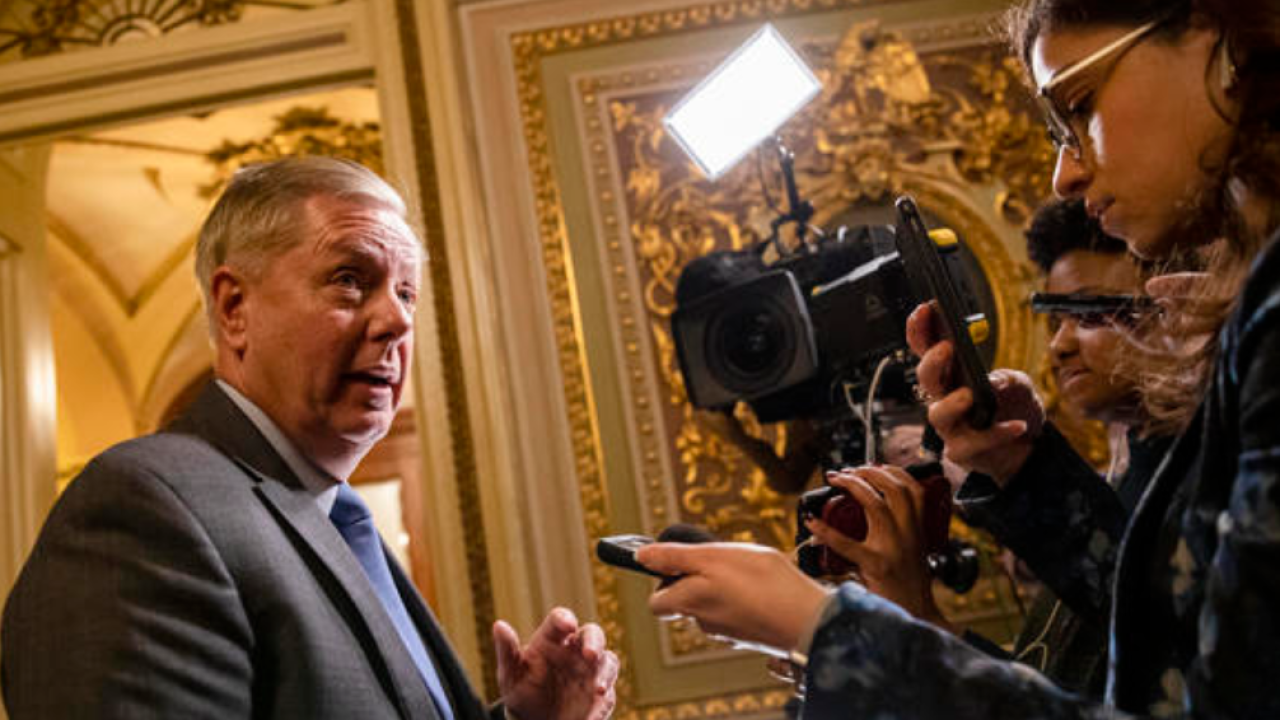 Republican Senator Lindsey Graham, one of President Trump's most ardent defenders in Congress, said Tuesday he is in favor of a proposal for senators to review former national security adviser John Bolton's unpublished manuscript in a classified setting, the details of which have roiled the Senate impeachment trial.

"I totally support @SenatorLankford's proposal that the Bolton manuscript be made available to the Senate, if possible, in a classified setting where each Senator has the opportunity to review the manuscript and make their own determination," Graham tweeted.

James Lankford, a Republican senator from Oklahoma, said in a video on Facebook on Monday he believes senators should be able to access the manuscript as they weigh whether to hear additional testimony.

"We should be able to read that manuscript even before the classification is done on it so that we understand what's in that and to be able to hear first hand from that information," Lankford said.

But Senate Minority Leader Chuck Schumer shot down the idea of reviewing the book behind closed doors during a press conference on Tuesday, and said Bolton should testify regardless.

"What an absurd proposal. It's a book! There's no reason for it to be read in the SCIF unless you are trying to hide something," Schumer said, referring to a secure room for viewing classified material.

Bolton's book, "The Room Where It Happened," will not be published until March 17. But on Sunday, The New York Times published a bombshell report based on the details of the unpublished manuscript. According to The Times, Bolton recalls in the book a conversation with Mr. Trump during which he tied nearly $400 million in military assistance to Ukraine to investigations into his political rivals. (The book is being published by Simon & Schuster, which is a subsidiary of ViacomCBS, the parent company of CBS News.)

The conditioning of the military aid is at the heart of Democrats' impeachment efforts against the president. The House's impeachment managers argue Mr. Trump should be removed from office for abuse of power and obstruction of Congress over his dealings with Ukraine.

But Mr. Trump and his legal team have said the assistance to Ukraine was withheld because the president was concerned about corruption in the country and was right to seek investigations into former Vice President Joe Biden, his son Hunter Biden, and Burisma, the Ukrainian natural gas company that hired Hunter Biden to sit on its board.

The New York Times published a second article based on Bolton's manuscript Monday stating the former national security adviser told Attorney General William Barr last year he was worried Mr. Trump was doing favors for the autocratic leaders of Turkey and China. A spokeswoman for the Justice Department denied Bolton's account and said he was mischaracterizing his conversation with Barr.

Mr. Trump rejected Bolton's claims as "false." White House press secretary Stephanie Grisham said the timing of the revelations is "suspect" and suggested the leak of the manuscript was intended to boost publicity for the book.

But Charles Cooper, Bolton's attorney, said in a statement Monday the blame for the leaked details should be placed on the White House, as the manuscript was submitted to the National Security Council for a prepublication security review for classified information in late December.

Bolton's revelations have breathed new life into Democrats' calls for the Senate to hear from additional witnesses during the impeachment trial and bolstered the call from GOP senators who have expressed an openness to hearing additional testimony for witnesses. On Monday, Senator Mitt Romney, a Republican from Utah who has been willing to call for more witnesses, said it's "increasingly likely" other GOP senators will get on board.

"I think at this stage I think it's pretty fair to say that John Bolton has relevant testimony to provide to those of us who are sitting in impartial justice," he said.

Four Republicans would need to join their Democratic colleagues in voting in favor of calling Bolton to testify in the trial. Bolton has said he would appear before the Senate if subpoenaed.