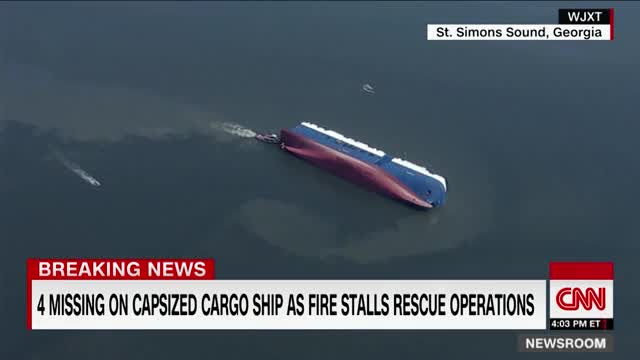 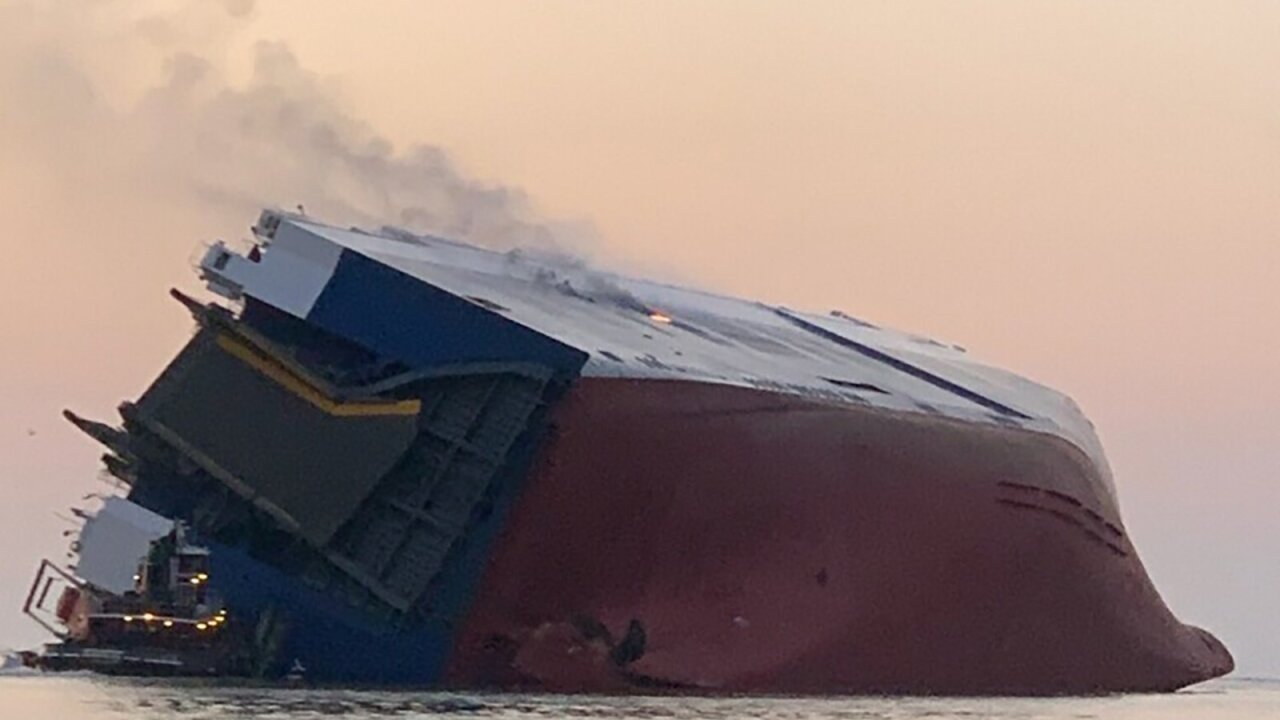 GEORGIA — Four crew members remain unaccounted for after a cargo ship began "listing heavily" off the coast of Georgia on Sunday morning, according to a news release from the US Coast Guard.

By the afternoon, the vessel, the 656-foot Golden Ray, was laid over on its side in St. Simons Sound as authorities worked to stabilize the ship so they could resume rescue operations, which were stalled due to a fire on the ship, Capt. John Reed, commander of the Coast Guard Sector Charleston, said at a news conference.

It was about 2 a.m. when authorities were first notified the vessel was listing, Reed said.

Crews from the Coast Guard and other agencies responded and rescued 20 of the 24 people on board, 23 crew members and one pilot, before a fire forced them to stop.

The Coast Guard said the ship is carrying vehicles.

"As smoke and flames began to appear, our crews, along with the Glynn County heavy rescue team, assessed that the situation was too risky to further go inside the vessel to attempt to locate the four individuals who remain missing at this time," Reed said.

The black smoke emanating from the ship has since ceased, Reed said.

"But we are unable to determine specifically without going inside whether the fire has been completely extinguished," he added.

Officials are working to stabilize the leaning vessel, he said. Once that's done, rescue efforts will continue.

"The other outcome could be that it may be deemed more appropriate to go ahead and right the vessel and de-smoke and de-water before we are able to actually get in there and locate the four individuals," Reed said Sunday.

The National Transportation Safety Board is also supporting the investigation, the agency said in a tweet, with two NTSB investigators assigned to the incident.

The International Seafarers' Center in Brunswick provided food and clothing to between 18 and 20 crew members, the center's director, Vicki West, said.

The crew members are Filipino and South Korean, she said, and were provided with bags of hygiene items, socks, games and Bibles.

The ship, sailing under the flag of the Marshall Islands, was bound for Baltimore, where it was expected to arrive Monday, according to MarineTraffic.com

In the meantime, "pollution mitigation efforts" are getting underway, according to Cmdr. Norm Witt of the Coast Guard's Marine Safety Unit Savannah.

As of Sunday afternoon, he said, there was no "active release" of pollution, he said, but a unified command has been established to respond.

The cause of the incident is part of an ongoing investigation, officials said.

Multiple agencies are assisting in the incident, including the Georgia Department of Natural Resources and the Glynn County Fire Department, according to the Coast Guard's news release.

A swimming advisory was issued for beaches in St. Simons and Jekyll Island, the Georgia DNR's Coastal Resources Division said in a statement, pending further information about potential environmental impacts.

The agency "will conduct water quality sampling to ensure the safety of shellfish harvesting beds and swimming beaches," it said. "The Coastal Health District is issuing a precautionary swimming advisory until that testing can be done.