$1.8 billion in PPP loans have been approved to 22,785 Montana recipients 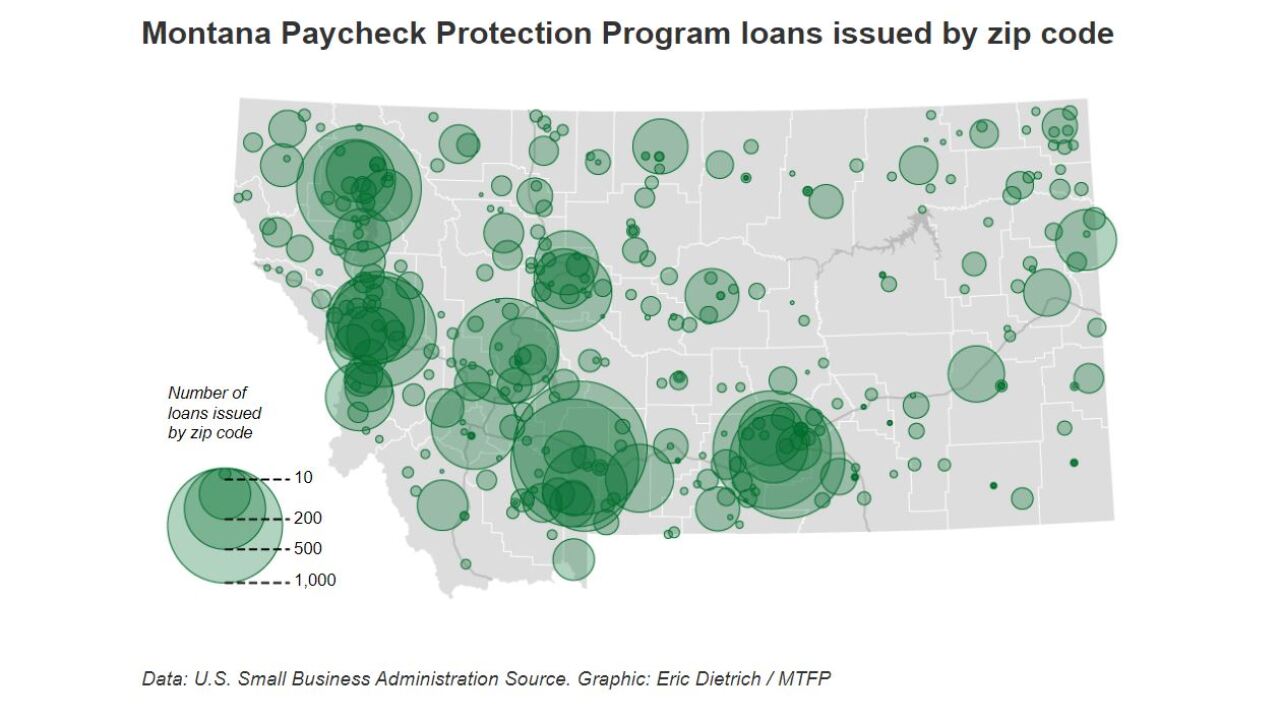 Tens of thousands of businesses and nonprofit organizations across Montana have benefited from the Paycheck Protection Program, a massive federal effort that has routed billions of dollars into subsidized bank loans intended to help small businesses keep workers on payroll during the economic disruption prompted by the coronavirus pandemic.

The Montana Free Press reports that data released this week by the U.S. Small Business Administration provides the first detailed accounting of the businesses aided by the program, indicating that Montana’s loan recipients span nearly the full width of the state’s economic landscape.

In White Sulphur Springs (population 934), for example, the SBA data indicates that local businesses received 39 loans totaling at least $1.6 million. Among the recipients were Mountainview Medical Center, the local critical access hospital, and Tintina Montana, the company developing the Black Butte copper mine.

Other recipients listed in the small town include two bars, five full-service restaurants, six cattle ranches, a brewery, a hardware store, a pharmacy, a meat processor, two grocery stores, two construction firms and a golf course.The story is similar across Montana, from Troy, where 28 businesses received PPP loans, to economic powerhouse Bozeman, with 2,661, to Ekalaka, with 15. In sum, the 22,785 Montana recipients listed in the data represent roughly a fifth of the state’s 123,000 small businesses.

The Paycheck Protection Program is one of several federal relief efforts created by the Coronavirus Aid, Relief, and Economic Security (CARES) Act, which passed Congress with bipartisan support and was signed into law by President Donald Trump in March. Eligible businesses and nonprofits, generally with 500 employees or fewer, apply through banks for subsidized loans intended to help them stay on top of payroll, rent and other ongoing expenses through the course of the pandemic. The loans, generally limited to two-and-a-half times monthly payroll, can be converted to grants if businesses maintain their employee headcount.

While the program had been set to close June 30, renewal legislation means the Small Business Administration is accepting new applications with an Aug. 8 deadline. The program was initially allocated $349 billion and received an additional $310 billion from Congress in April.

While the SBA has previously released aggregate state-level statistics about PPP spending, this week is the first time it has released detailed information about which specific businesses have benefited from the program, which has been criticized for messy administration. Some large publicly traded companies have returned PPP funds amid concern they were dominating a program intended to help small employers. A group of national news outlets filed a freedom of information lawsuit in May seeking detailed information on loans issued through the Paycheck Protection Program and another CARES Act relief effort, the Economic Injury Disaster Loan program.

Gov. Steve Bullock announced a separate, state-administered coronavirus relief program for Montana businesses in May. That initiative, the Montana Business Stabilization Grant Program, was funded by $1.25 billion in CARES Act money that was given directly to the state and intended, state officials said, to provide quick relief to businesses that hadn’t been able to secure help from the federal government.

As of June 26, the state business stabilization grant program had paid out $37.6 million, according to data posted on the Montana Department of Commerce website — about 2% of the figure the SBA reports for the Paycheck Protection Program.

The newly released PPP data doesn’t disclose the names or addresses of businesses that received loans of less than $150,000. Businesses that received $150,000 or more are named, but have their loan amounts disclosed only as a broad dollar range, not a specific figure. The data doesn’t indicate which, if any, of the loans are on track to be converted to outright grants.

The Washington Post, which has published a web-based tool letting readers search the SBA data for PPP loans of $1 million or more, reports that it has heard from some businesses saying the data places them in the incorrect loan range. National media outlets have also reported that PPP beneficiaries include the Ayn Rand Institute and the Americans for Tax Reform Foundation, which is headed by anti-tax activist Grover Norquist.

“The average loan size is approximately $100,000, demonstrating that the program is serving the smallest of businesses,” he said.

A number of high-profile Montana businesses also received smaller loans, the data indicates, as did several Montana media outlets, which have struggled with coronavirus-driven advertising declines. The Flathead Beacon, named in the SBA data as Flathead Citizen LLC, received a loan in the $150,000 to $350,000 range, as did the Livingston-based Yellowstone Newspapers chain, which is named in the data as Star Printing Company and received a loan between $350,000 and $1 million. The SBA data also lists 30 other unnamed loan recipients classified as newspaper publishing companies. (That number includes the Montana Free Press, which is registered as a 501(c)(3) nonprofit and received a $30,225 loan.)

Explore the data list of the Montana businesses receiving loans of $150,000 or more, annotated by MTFP to include industry information based on each company’s North American Industry Classification System designation, is available as a Google Spreadsheet here. Official data is also available on the U.S. Treasury website.