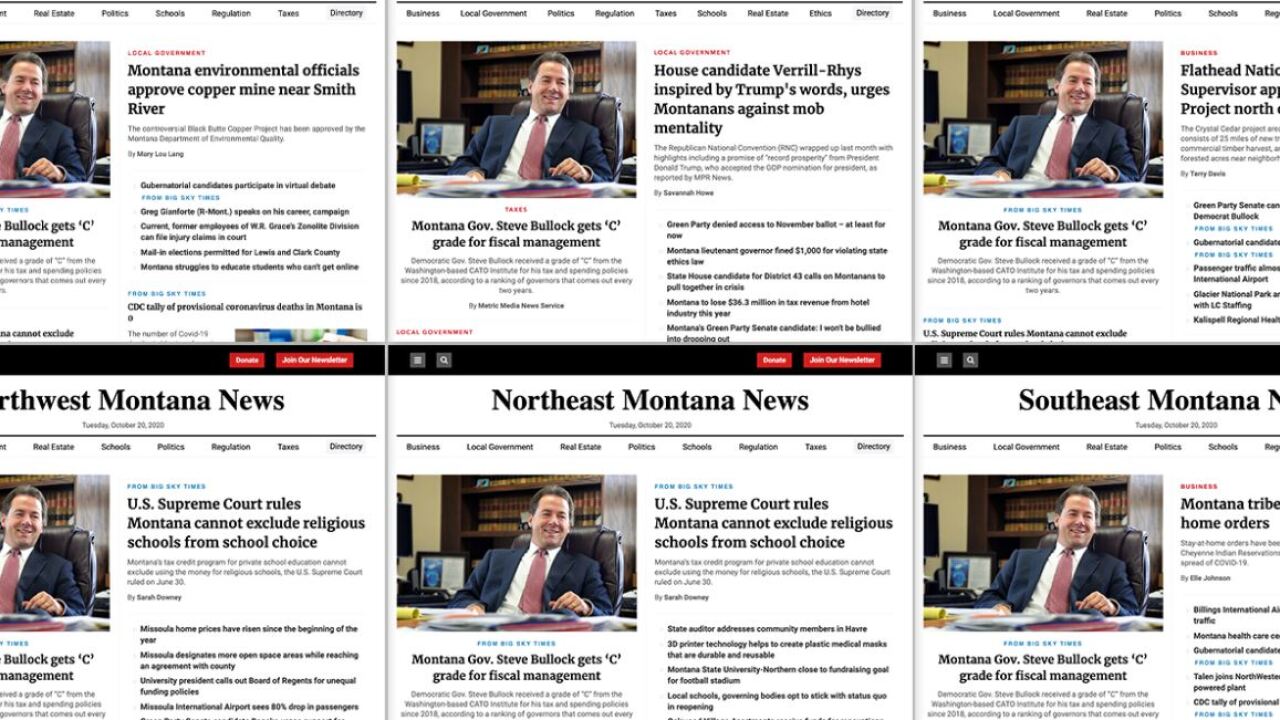 A late July article from Big Sky Times looks at first glance like a piece of old-fashioned investigative journalism, published on what appears to be a modern news website.

“Montana media, GOP failed to investigate Bullock’s conduct,” reads its headline, over a stock photo of incumbent governor and U.S. Senate candidate Steve Bullock, a Democrat, as reported by The Montana Free Press.

The first few paragraphs of the piece quote former Republican legislator Matthew Monforton, criticizing the governor for alleged incompetence and corruption. It continues in a similar fashion, attributing some of its claims to “media reports” that link back to Monforton’s political blog.

The piece found its way into several Montana-focused conservative Facebook groups. Among them was the Stillwater Republican Women page, which passed the piece along to its several hundred followers with a note reading, “Better think about this article while voting in November !!!”

But while the piece has the visual trappings of legitimate, Montana-produced news, its author, Juliette Fairley, is apparently based in New York City. And despite the Montana-sounding name, Big Sky Times isn’t a local production, either — rather, it’s part of a national network of news sites run by a company called Metric Media.

While Montana’s media landscape has for years included left- and right-leaning political blogs authored by resident partisans, Big Sky Times and eight other Montana-focused sites affiliated with Metric Media represent a new trend: digital news outlets that present themselves as community news sites even though they operate without a local editorial staff and appear to promote a political agenda.

The New York Times reported Oct. 18 that a national network of 1,300 web sites, including some operating under the Metric Media brand, say they provide “objective” local news coverage but are in fact populated in part by stories dictated by political operatives in exchange for payment.

The Times, which said its story was based on more than 30 interviews with Metric employees and others as well as internal company records, reported that the network’s stories are typically written by freelancers who often earn between $3 and $36 per assignment and don’t live in the communities they purportedly cover. The Times report also cited an internal email in which an editor for the network told freelancers that “clients want a politically conservative focus on their stories, so avoid writing stories that only focus on a Democrat lawmaker, bill, etc.”

Each site posts articles written by apparent freelancers as well as short pieces generated from public data with titles like “11 businesses in zip 59823 had between five and nine employees in 2017” or “Analysis: Residents receiving food stamps in June down 0.1% from previous month.” The sites also published hundreds of press releases from local organizations such as chambers of commerce, and commonly rewrote stories originally published by established Montana news organizations such as Montana Public Radio and Helena’s Independent Record.

The sites’ content also takes a notably conservative tack. An MTFP review of the 53 bylined articles published by Big Sky Times from October 2019 to September 2020 finds that a majority of the site’s political stories elevate criticism of Democratic state politicians leveled by Republican or Green Party voices, with the most sustained criticism reserved for Bullock.

Dennis Swibold, a professor of journalism at the University of Montana, examined the sites earlier this year and again in late summer. He noticed a conservative bent, like stories of critical campaign donations received by Bullock’s senate campaign without similar coverage of Bullock’s opponents, as well as the sites’ typically prominent and positive treatment of local GOP candidates.

“That did make me wonder who was behind them and who was funding them,” he said.

“The Metric Media Foundation is interested in promoting news innovations, not political agendas,” it read in part.

Situation Management Group, according to its website’s About Us statement, was “established in 1995 to help companies respond to crisis and other threats to shareholder value.”

Cameron’s statement said the foundation’s backers are “are entrepreneurs with interests in media and technology, with no political experience or agendas.”

Cameron’s statement described the organization as attempting to help fill the void left as traditional news outlets like print newspapers, struggling with their business models, cut back on community-based news coverage. It cites research by The Expanding News Desert project, which tracks places in the U.S. where residents have limited access to reputable coverage of their communities.

Penny Abernathy, the project’s director, said in an interview with MTFP that she’s concerned by the prospect of potentially partisan news organizations filling those gaps while posing as local news sites.

Local news organizations, Abernathy said, are often seen by the public as significantly more trustworthy than national outlets, in whom trust has declined in recent years.

“When you’re not able to tell what the agenda of an organization is, or when there’s a not very obvious agenda, there’s concern that it erodes trust even further and also injects a level of partisanship,” she said.

Matt Gibson, director of the Montana Newspaper Association, said the state’s newspapers can compete with efforts like the Metric network by focusing on building their local relationships, and reminding their readers how newspapers can bring people together.

“Ultimately, what you get is when people pick up their own newspaper, they recognize their local community,” he said. “These websites can’t deliver that.”

(Montana Free Press, a 501(c)(3) nonprofit news outlet, was also launched in response to concerns over diminished newspaper coverage in Montana. MTFP was founded by veteran Montana reporter John S. Adams in 2016, is run by a Helena-based editorial staff and subscribes to editorial independence standards articulated by the Institute for Nonprofit News. Board members and donors are listed on MTFP’s website. Like all reputable news outlets, MTFP does not accept payment for specific news stories.)

At least one arm of state government has passed its own judgement on the Metric news sites: the governor’s press office.

According to an email exchange provided to MTFP, a Metric news reporter working on the July 15 Big Sky Times article contacted the governor’s office looking for comment on “allegations against Gov. Bullock” — linking from the word “allegations” to Monforton’s blog.

The press office didn’t respond — a point that was noted in the article.

“[T]he questions were phrased strangely and missing some words that made me question its legitimacy,” Bullock press secretary Erin Loranger told MTFP in an email. “The questions did not pertain to legitimate allegations and are consistent with content from known fake news sites.”

Loranger also said that Fairley, the reporter, didn’t appear to be affiliated with any reputable sites.

“So we did not engage,” Loranger said.