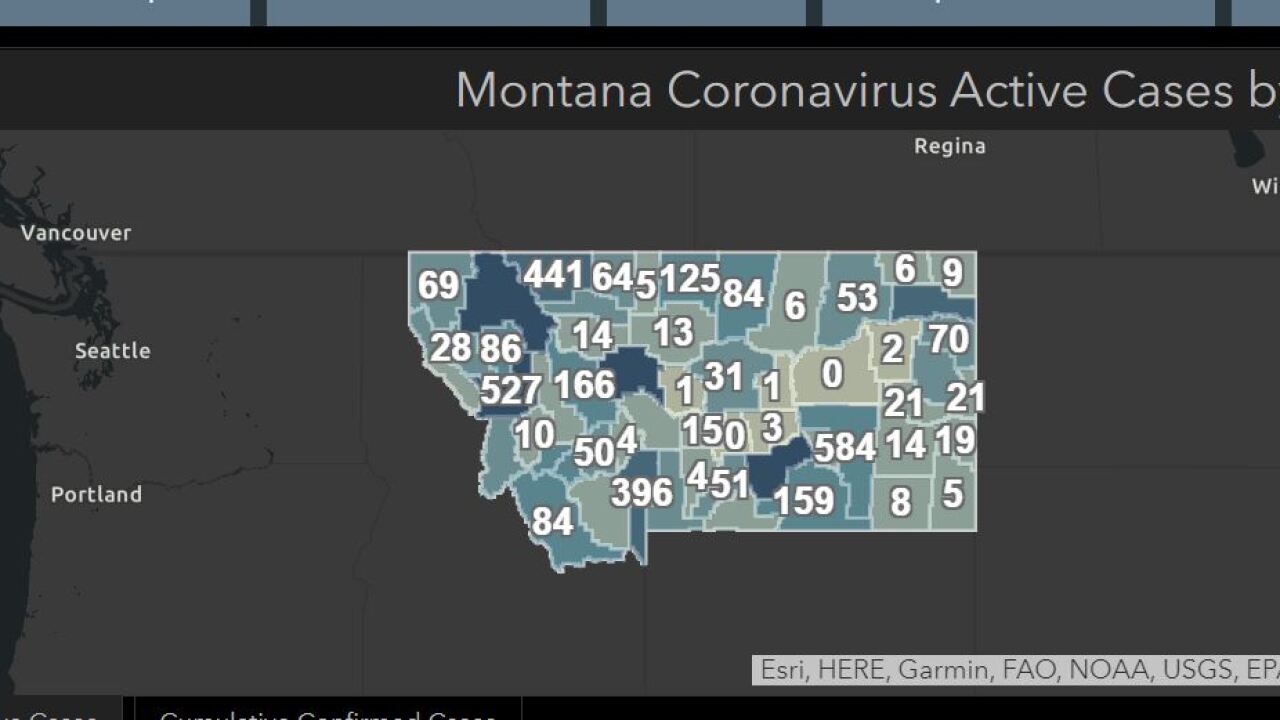 Montana has set multiple new records for COVID-19 cases and hospitalizations in the past week, and now ranks among the top states in the nation in daily new cases per capita. Hospitals in some of Montana’s largest cities are at or near capacity, while health care providers are pleading with people to heed public health advice.

Public health departments say they aren’t able to keep up with contact tracing and feel powerless in the face of politically charged resistance to masks and social distancing, reports Montana Free Press.

“Right now, the biggest challenge is [that] we have got to slow down the number of cases or else our systems are going to be completely overrun,” Yellowstone County Health Officer John Felton said on Monday, Oct. 5.

The current surge started two weeks after Labor Day and has accelerated in recent weeks. At first, the rise in new cases seemed to be driven by young people and students returning to schools (226 Montana schools have reported cases so far), but once the virus gets a foothold in a community, it quickly spreads. The Centers for Disease Control found that increases in cases among people in their 20s generally precede an increase of cases among people in their 60s by less than two weeks.

The outbreaks have been occurring in Montana’s largest communities, with Yellowstone County and Flathead County reporting the largest numbers. But they’ve also been happening throughout the state, in rural communities that are not as well equipped to handle the virus.

Yet as cases continue to rise and the state recorded its 206th coronavirus-related death on Friday, Gov. Steve Bullock has declined to impose new restrictions to address the rising case numbers, instead increasingly pleading with local officials to enforce existing directives and putting primary responsibility on the public.

“[New restrictions are] something we can look at down the road,” Bullock said during a press conference Wednesday. “Local government has the tools to [limit spread]. They know the counties where there’s significant transmission. And that’s where I think locally elected leaders have to be stepping up to say we can do more.”

For many months, Montana avoided major outbreaks with sweeping measures such as a stay-at-home order and limiting capacity in restaurants and bars, even zeroing out new cases in late May. As a result, the state was able to largely reopen and log the fifth-best economic recovery of any state, a statistic frequently touted by Bullock.

Nationally, strict measures have been implemented to dampen runaway outbreaks. The CDC found that in Arizona, which saw one of the largest outbreaks in the U.S., implementation of measures like masks mandates and restaurant closures led to a decrease in cases. In the northeastern United States, aggressive lockdowns and public buy-in helped arrest uncontrolled spread.

But that doesn’t work if local officials don’t support the measures. Eight months into the pandemic, Bullock is now having to walk a fine line between achieving public buy-in for measures that are known to stop the virus’ spread and implementing statewide restrictions that can be unpopular, may not achieve public buy-in, and are likely to harm the economy.

Bullock is in the heat of a tight U.S. Senate race with Republican incumbent Sen. Steve Daines. Daines is an avid supporter of President Donald Trump, who was recently hospitalized with COVID-19, and upon release from the hospital told Americans to not let the disease “dominate” their lives.

Bullock said Wednesday that the state isn’t using any specific metrics to determine if or when more restrictive measures are needed. Jim Murphy, chief epidemiologist for the Montana Department of Public Health and Human Services, said now that health officials know more about the virus, they’re realizing that circumstances can differ dramatically from one place to another.

“That’s the challenge with doing things that are too specific on a statewide level,” Murphy said in an interview with Montana Free Press. “It risks implementing controls in some places that aren’t necessary, or [that] in other places aren’t enough.”

And ineffective measures are likely to increase the public’s feeling of COVID fatigue, reducing compliance with social distancing and masks, Murphy said.

But if case numbers continue to rise, additional measures will have to be implemented, and more businesses, from restaurants to tire shops, will likely have to shut down as employees become sick or enter quarantine. The more the virus spreads, the worse the impacts on the whole community. Even hospitals might have to once again shut down routine services, Murphy warned.

STATE VS. LOCAL RESPONSE
Rather than issue new statewide restrictions, Bullock has placed the onus of responsibility on county officials. At Wednesday’s press conference, he specifically singled out Flathead County, which is currently experiencing one of the state’s largest outbreaks, as needing to do more.

“This can’t all be solved from Helena. There’s local responsibility here to do what they can do to curb the spread of this virus,” Bullock said.

Flathead County Commissioners responded by issuing a statement supporting the “Constitutional rights of Montanans” to choose whether to wear a mask and to “make good decisions” about how businesses should operate.

Responses like these are frustrating to public health officials.

“The only way that added restrictions would work right now is if we had enough public support,” said Drenda Niemann, health officer for Lewis and Clark County. “I think we’re all struggling with this. We know how the virus behaves, and we know how to protect ourselves, but we, as human beings, are fighting against the best thing to do right now. We [public health officials] have to dance with politicians right now. It continues to make it difficult. There’s mixed messages that get sent to the public, and they don’t know who to listen to.”

“It’s very difficult right now. If something as simple as masks causes people to protest outside of the health department, it becomes very difficult to think about going beyond that without real support from elected leaders of all stripes, from business leaders, from the community in general,” Kelley said. “I think it’s a reasonable question for the community to ask. I think it’s important that we attack this with unity and understanding, rather than through division and acrimony. In the environment we’re in, that’s very difficult.”

Kelley said if he thought new measures would work, he would implement them. Instead, he’s working with hospitals to help them prepare for an influx of patients.

Niemann said the issues facing Lewis and Clark County, which reported 18 new cases Friday and has 166 active cases, are different from those facing other population centers like Yellowstone County and Flathead County, each of which has more than 1,000 active cases, and Gallatin County, where health officials say young people and bars are leading to renewed spread.

A more surgical approach that takes into consideration the type of spread in each place and implements measures to combat specific sources of spread is not only more likely to get public buy-in, it’s more likely to work, Niemann said.

LOCAL RESTRICTIONS INCREASING
Murphy said the state’s epidemiology staff works with local jurisdictions to help manage outbreaks and determine what measures might help. It’s then up to local officials to implement restrictions, and Murphy acknowledges that some local health officers aren’t getting as much local support as others.

Tribal governments have responded with strict measures. The Blackfeet Nation, which currently reports 316 active cases, implemented a two-week stay-at-home order through Oct. 13. On the Fort Peck Reservation, Assiniboine and Sioux officials implemented a stay-at-home order and closed schools Oct. 2 in response to an outbreak, saying they required more aggressive measures than the state is providing.

On Monday, Felton gave Yellowstone County residents an ultimatum: Get your act together or more restrictions are coming. Yellowstone County has been Montana’s COVID hotspot since July, and is starting to see its hospitals overwhelmed, Felton said. Felton announced that if the county is unable to get control of the virus by the end of the month, he will issue new restrictions such as shutting down bars at 10 p.m., limiting gatherings to 25 people, and limiting restaurants and bars to 25% capacity.

Felton’s strategy is designed to give the public time to ramp up its adherence to public health guidelines. If it doesn’t, he said, the entire community will “share the burden of that failure.”

“Part of the challenge is [that] it does take a little time for these measures” to show results, Felton said. “I want to give people a chance to prove they work.”

Felton did, however, set a threshold — an average of 50 new cases per day — that would supersede his patience. Four days later, it appears Billings may surpass that threshold.

Still, even if Yellowstone County improves, Billings, which serves as a regional health center for much of central and eastern Montana, could get overrun by other communities experiencing outbreaks. Today, 55% percent of all current hospital patients in Billings are from other counties, Felton said.

Murphy applauded Felton’s decision. He said similar measures have proved effective in larger cities that have experienced outbreaks throughout the pandemic.

MORE THAN PUBLIC HEALTH RESPONSE
Public health officials recognize that in order for public buy-in and adherence to health directives to work, the public needs government support. People who are sick need to be able to stay home without worrying about losing their paycheck. Businesses need to know they can survive if they have to shut down to stop the spread of the virus in their workplace. The number of Montanans filing for unemployment benefits is now twice what it was in February, and nearly one in four small businesses in Montana that were open in January are not open now.

“We have to remember this isn’t just a public health response,” Niemann said. “Public health is asking people to stay home when they’re sick. So that’s where politicians come into play. They need to allocate resources to make that happen and make sure they have sick leave available to them.”

As talks about a second federal stimulus package are stalled in Washington D.C., Bullock said workers need to stay home if they’re sick, but he recognized that they help to do that.
“I don’t think the social safety net is adequate right now,” Bullock said.

And even though the state is testing 91,000 people a month, local public health officials say they don’t have adequate personnel for contact tracing and testing of close contacts.

“It’s kind of like hanging on for the ride right now, rather than limiting it,” Kelley said. “What we’re doing right now is we’re able to slow down the growth of the pandemic, but we’re not going to stop it through contact tracing when it gets to be this size.”

Felton said that in Yellowstone County, which reported 155 new cases Friday, contact tracing interviews may not get started until 96 hours after a positive test, making it much less effective.
The resulting spread can lead to community-wide problems.

A wedding in Deer Lodge County led to significant spread that led to Anaconda schools being closed for two weeks on Oct. 2, Bullock said. Viral spread in Toole County led to dozens of COVID-19 cases in an outbreak at a private prison in late September.

Dr. Greg Holzman, Montana’s state medical officer, said health officers need help with resources and public support. The virus, he said, is going to be present and dangerous at least until a vaccine is developed.