One dead after crash east of Glasgow 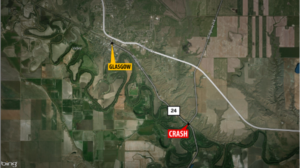 GLASGOW – One man is dead after crashing his SUV Tuesday morning according to Montana Highway Patrol.

Trooper Charles Tuggle said that the man was traveling south on MT Highway 24 in a Mazda SUV when he crashed at the T-type intersection of Highway 42. He said that it did not appear that speed or alcohol were factors, however, the investigation is still under investigation.

The man was traveling with his dog, who also was killed in the crash.