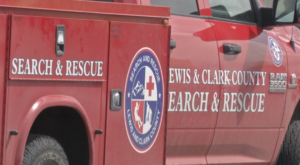 HELENA – Authorities say a 17-year-old Great Falls boy died Saturday afternoon after diving off a cliff into the Missouri River north of Helena.

Dutton said the teen and his family were boating in the Gates of the Mountains area. The boy jumped off a 40-foot-cliff into the water.

Dutton said there was an outcropping of rocks that couldn’t be seen from above.

“His father dove in after David did not surface and made a valiant effort to find his son, but to no avail,” he said.

There was no cell phone service in the area, but a Gates of the Mountains tour boat that was passing by radioed for help.

West Valley and Lewis and Clark County Fire Departments responded to the scene, along with Montana Fish, Wildlife and Parks; the sheriff’s office Water Emergency Team and Lewis and Clark Search and Rescue. Search and rescue crews eventually found the boy’s body in about 30 feet of water, just south of Mann Gulch.

Dutton said Delcomte’s death has been ruled an accident, but the cause hasn’t been determined. He will be taken to Missoula for an autopsy.