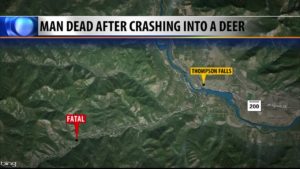 MISSOULA – One man was killed Friday while riding his motorcycle on Prospect Creek Road in Sanders County.

The Montana Highway Patrol reports the 67-year-old man from Wallace, Idaho was riding southbound when a deer jumped into the road. Unable to avoid it the motorcycle struck the animal and rolled.

The victim was taken to Clark Fork Valley Hospital where he later died from his injuries. MHP reports that alcohol and drugs are suspected to be involved in this incident.

Authorities are continuing to investigate the accident. The victim’s name has not yet been released.