Bozeman – For the third time, a Bozeman business is representing the entire state of Montana at a White House event celebrating American manufacturers.

“It’s very much an honor,” says Curt Smith, president of Schnee’s in downtown Bozeman. “We got invited by the White House to represent the state of Montana.”

When you get invited to go to the White House, it might be tough to say no. For Smith, he’s proud to make the trip, representing both Schnee’s and the Treasure State. 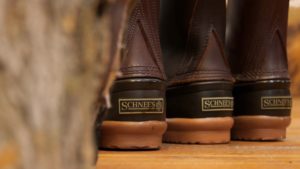 “We have been building our boots in Bozeman and even on Main Street since 1987,” he says. “We’re really proud about that.”

It’s all a part of the White House’s “Made in America” showcase, bringing all 50 states together in Washington, D.C.

A business from each state is picked for exactly what the title suggests, its products and where they were made.

“Those folks out there are proud to build the boots,” Smith says. “Corinne Warden, our production manager, will be joining me on this venture to the White House and, to be honest with you, it’s still a little amazing to me. I come in here, basically sell shoes here every day, and I love doing that.”

Those who make these boots say that they are proud of this achievement, knowing it was American made.

It isn’t the first or second time a Bozeman business has been invited to the event.

Last year, Montana Instruments made the trip to the White House, demonstrating its cryostation.

In the event’s first year, in 2017, it was Bozeman’s Simms Fishing Products.

Now, Schnee’s has won the honor, making it three years in a row for Bozeman businesses.

“We’ve had many opportunities to move production different places and we have always decided to dig our heels into the sand and stay here in Bozeman,” Smith says.

Smith and the company’s production manager left for the Capitol Friday, setting up their booth on Sunday.

You can be sure their boots will be there, too

“We don’t know what’s out, ahead of us, but it’s all about these boots and all about the fact that we make them in the United States,” Smith says.