GREAT FALLS – A sight and sound of summer days gone by is back in the Electric City.

Darren Brown and his 8-year-old son Benjamin are making the rounds and bringing out the excitement in ice cream lovers of all ages.

They’ve done so with the revival of a Frosty Ice Cream truck.

“He’s here, he’s at our house,” shouts one young customer as the truck approaches her home.

“I wanted to start a business, and Dad thought of Frostys,” said Benjamin. “So we found an old mail truck and turned it into this!” 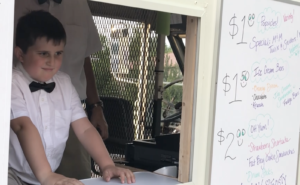 “The Frostys haven’t been around Great Falls for a long time so we thought we’d bring the Frostys back,” said Darren.

They got the idea when they saw an ice cream truck in Spokane. Their truck features an antique cold plate freezer and even the sound system is an original.

The truck and the salesmen can be seen on the streets every night throughout the summer.

“We’re mainly going on the west side,” said Darren. “We’ve been hearing from a lot of people that the westside isn’t getting very well serviced for ice cream sales.”

It’s a family affair. Darren’s wife Michelle calls herself the silent partner. They’ve been distributing their sweet flavored frozen confections for just about a week. The early reviews are good, from the customer’s and owner’s perspective.

Benjamin was hard pressed to say what his favorite part of the job is.

“Oh my, I don’t know if I have one, maybe serving the ice cream, making the kids happy,” said Benjamin.

“My favorite part is just the smiles on the kids and the adults and the people, it’s just really neat,” said Darren. “They like to see the Frosty back.”

The Browns have a website so people can keep up with business and find out where the truck will be next.