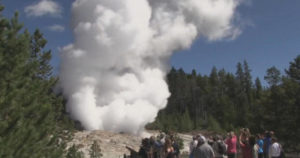 The world’s tallest active geyser — whose major eruptions shoot water more than 300 feet into the air — is known to be unpredictable. But if there was ever a year to witness Steamboat’s spectacular surge of water, this might be it.

We’re just over halfway through 2019 and the Steamboat Geyser has already erupted 25 times, according to the U.S. Geological Survey. That puts it on track to surpass last year’s record of 32 eruptions — the largest number ever recorded in a year. The record before that was 29 eruptions in 1964.

Scientists aren’t sure what’s behind the recent increase in activity, but the short answer is that this is just how geysers work.

“They’re mostly random and experience phases of alternating eruptive activity,” Michael Poland, the USGS scientist-in-charge of the Yellowstone Volcano Observatory, wrote in an email to CNN. “So while fascinating, it’s not unusual, nor cause for concern.”

Some scientists have attributed increases in Steamboat’s eruptions to thermal energy shifts caused by earthquakes. But there is no clear correlation between the geyser’s eruptions and earthquake activity, according to the National Park Service.

“The dynamic nature of this geyser basin and the geology of Yellowstone as a whole keeps everyone guessing,” the National Park Service says on its website.

Until 2018, the Steamboat Geyser had been mostly calm for about 15 years.

Yellowstone National Park is home to about 10,000 hydrothermal features, including hot springs, geysers, and mud pots, the National Park Service says. It has about 500 geysers as well as the largest concentration of active geysers in the world.