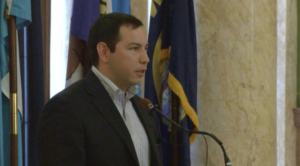 A state lawmaker from Missoula has become the first Democrat to announce a run for Montana state auditor in 2020.

State Rep. Shane Morigeau, an attorney who has served two terms in the Montana House, made the announcement Sunday morning. He said he is seeking the auditor’s job to work for affordable health care, which he said has been vital for people like his parents.

“For too long, everyday Montanans have had no voice in our state auditor’s office,” he said in a statement. “I know from experience how important it is to keep insurance companies honest and to ensure they aren’t gouging Montana families.”

The state auditor is also called Montana’s commissioner of securities and insurance. The office oversees insurance and the financial industry in the state.

The auditor’s position will be open next year. Current state auditor Matt Rosendale, a Republican, has announced he will seek Montana’s U.S. House seat in 2020.