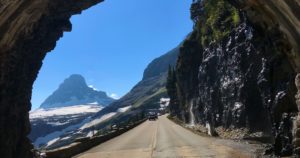 According to a press release late Friday night, “significant inclement weather is currently preventing the road from opening to vehicle traffic, as conditions are not suitable for motorized travel.” While 29 miles of Going-to-the-Sun are open at this time, accessibility to the entirety of the road — which was initially predicted by park officials to be this Saturday — has reached an impasse.

Officials cite “deteriorating conditions” in the area, referring to the abnormally harsh and winter-like conditions that hit much of the Treasure State to mark the 2019 summer solstice, particularly at higher elevations.

Temperatures sat below freezing as of Friday evening in Glacier National Park, the release stated. Officials predict that freezing rain and snow in upper elevations will mount an even greater challenge to the prospect of opening the scenic mountain road by the estimated deadline of June 22.

Mudslides were also cited in the release as a danger that is, at this time, preventing complete vehicular access to the road.

Bikers, however, can still trek Going-to-the-Sun — although the worsening weather could spell out an atypically icy, windy voyage. Still, the hiker and biker shuttle is open, according to the news release, and will remain so throughout the weekend.

Glacier National Park’s newly minted Recreation Access Display will not be available this weekend, as it is down for maintenance. Prospective park visitors are being encouraged to monitor the social media accounts of the park for updates on changing conditions.

A 12-year-long effort to restore the roadway, which stretches just past Lake McDonald Lodge, is set to culminate in an upcoming celebration. Festivities marking the near end of the Going-to-the-Sun Road rehabilitation project are scheduled for Thursday, June 27, at 10 a.m. at the Sun Point Day Use Area on Going-to-the-Sun Road East.

Whether the entire road will be accessible by the date of the celebration is unclear and will probably depend on the severity of weather conditions in the area.

For up-to-date information on how to plan a visit to Glacier National Park and conditions on and around Going-to-the-Sun Road, visit the park’s website here.