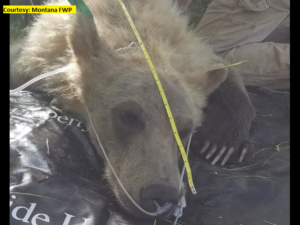 The female subadult grizzly was preemptively apprehended by FWP officials near the Dry Fork trail. She was then moved to the Blackleaf Wildlife Management Area in Teton County, according to a social media post from the Montana FWP Prairie Bear Monitor.

“We were permitted by the United States Fish and Wildlife Service to preemptively capture this bear because residents had their attractants secure, yet the bear was still frequenting areas near homes and was not responding to aversive conditioning,” FWP officials wrote on Facebook Friday.

Because the circumstances did not conform to those outlined in the Interagency Grizzly Bear Committee guidelines, and the animal had not caused any significant harm or conflict, the capture was defined as “preemptive,” according to the post.

FWP officials elaborated further in the social media post, saying younger bears often don’t know better than to loiter around residential neighborhoods. Another explanation for the animal’s behavior, as articulated by FWP, is that smaller grizzlies are often more prone to using human-inhabited areas to hide from larger, potentially competitive bears.

On Friday, officials placed a locator collar on the grizzly to monitor her behavior in the event she wanders into a residential area again.

“We hope the experience of being captured will help teach her to stay away from homes, which is better for everyone,” FWP said.

You can stay up to date with bear activity and monitor your respective area by following the Montana FWP Prairie Bear Monitor Facebook page here.