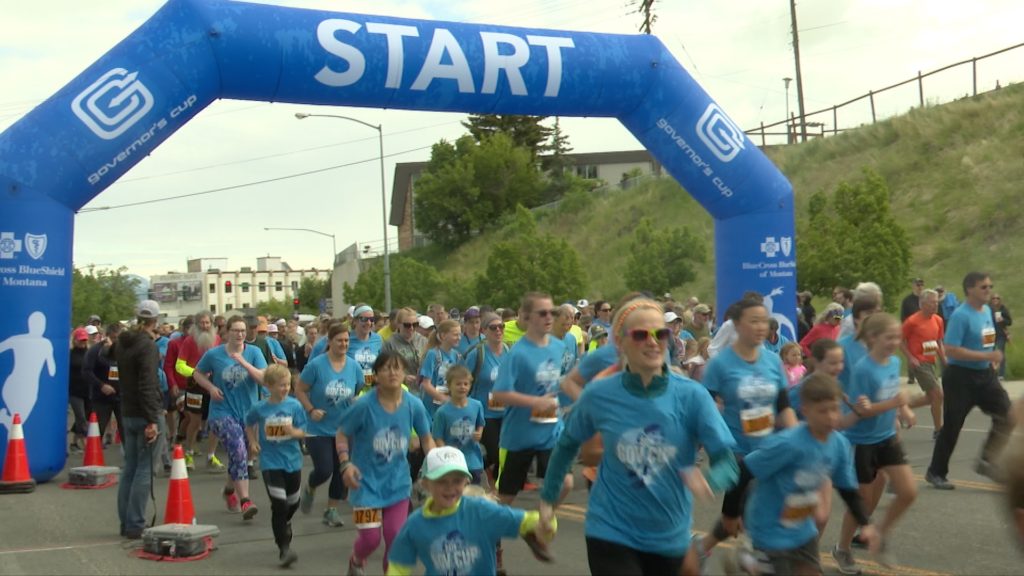 “Everyone had a great time – a lot of smiling faces crossing the finish line,” said race director Bryan Haines.

For the second year in a row, the first runner across the finish line was Missoula native Mark Messmer, who now lives in Issaquah, Washington. Messmer won the men’s half-marathon in just under one hour and eight minutes – setting a new record for the Governor’s Cup by beating his winning time from last year.

Runners from the Helena area saw strong success, winning both the men’s and women’s marathons.

“Everything just felt like it was clicking today,” he said. “I just kept holding strong through all the miles and held it together, so it was a good day.”

Kaiser spent much of the race running alongside friend and fellow local runner Matt Roberts, who finished in second place with his own personal best time.

“We pushed each other, and we both had really great times,” said Kaiser. “It was a fun race.”

The top finisher in the women’s marathon was Helena’s Betsy Ross, with a time of three hours and seven minutes.

“It’s always exciting to win in your hometown, the hometown event, so I’m really proud of that,” she said. “I’ve never won at the Governor’s Cup – I’ve always gotten third place – so this was kind of fun for me to actually win a race.”

While there were concerns about the possibility of rain Saturday morning, there were only a few light showers in Helena. Kaiser and Ross said the cooler conditions were actually ideal for them.

The marathoners started outside Jefferson City at 6 a.m. The half marathon kicked off an hour later in Clancy. At 8 a.m., the 10K race began near the Holter Museum of Art.

At 10 a.m., the largest group of runners took off from the Holter for the 5K race. Among them was Tracie Thompson, who brought along her kids: five-year-old Taylor, three-year-old Amelia and one-year-old Carter. She pushed Carter in a stroller, and the other two took turns in another stroller. Thompson said Taylor ran through the finish line herself.

“It’s fun to take them,” she said. “It adds a little bit of a challenge navigating the big old strollers through there, but it was a lot of fun, and to see how much she enjoyed it running parts herself, it was fun.”

Organizers say they’re proud to offer an event that is open to those of all ages and skill levels.

This was the second year the Governor’s Cup served as the primary fundraiser for the Caring Foundation of Montana. The foundation works to improve access to preventive health services through programs like Blue Cross and Blue Shield of Montana’s Care Van, which brings vaccinations and other needed screenings to underserved parts of the state.

“People ran for their health, but they also ran for the health of others today,” Haines said.

Heather Lieberg of Helena won the women’s half-marathon, coming within a minute of the record she set for the event in 2014.

You can find a link to the full race results at the Governor’s Cup website.