As many Montanans know, cowboy boots can tell a unique story about your life, your family and where you come from.

Nikki Edmundson lives in Harrison, (approximately) pop.165, with her husband, a rancher, and four kids.

“You’ll miss us if you’re not looking left, driving by,” said Edmundson.

But Harrison is the hub of her thriving boot making business, Canty Boots.

From this small town, she ships her high-fashion designs to an international audience, most recently including countries like Australia. Ranging from classic to extravagant, every pair of refashioned leather boots speaks for themselves.

“We’ll take a Tony Lama boot and give it a Lucchese bottom,” she said. “And we play with patterns and colors.”

“We’re using so many elements, different boot tops and bottoms, plus belts and braids and leather. Really the sky is the limit when it comes to design.” 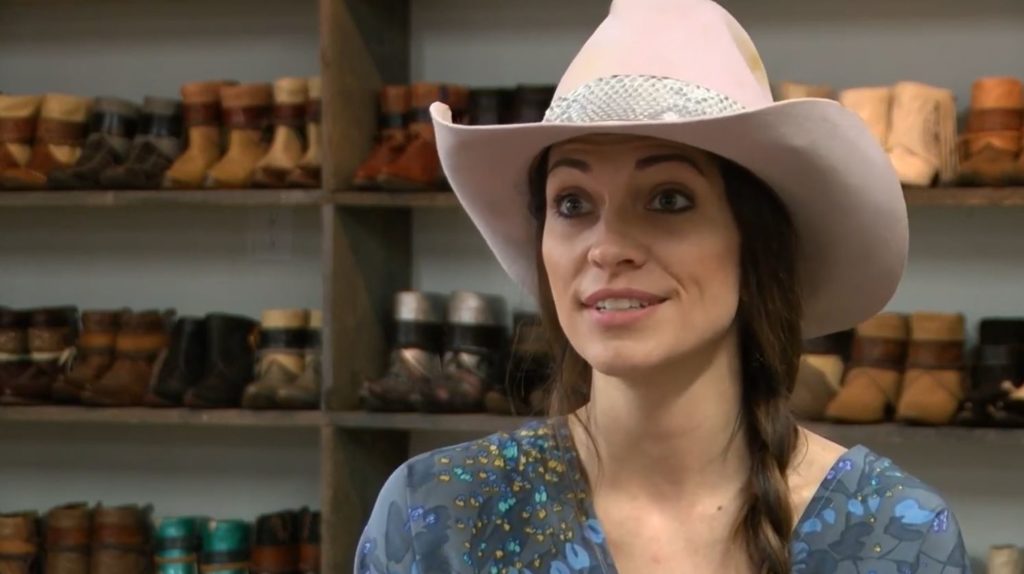 The story of Canty Boots begins in the Mining City eight years ago.

“I bought a pair of boots in Butte in an antique store,” said Edmundson. “They were eel skin, and they were really tight, and eel doesn’t stretch.”

So, she worked some magic, and Canty Boots were born.

“I cut them, and folded them down, and I went to a few stores in Butte,” she said. “Men and women were complimenting the boots. I just knew that I had something.”

Edmundson was studying to become a teacher but said she eventually chose boot making for the freedom.

“I’ve always been kinda artistic,” she said. “I loved art in high school and took a ton of classes at Butte High, and continued on in college. I’ve always been kind of brave when it comes to experimenting with things. And I started cutting boots, and it sparked something.”

Her plan worked out. Almost a decade later, Victoria’s Secret Angels have worn the boots.

It happened at a photo shoot in Aspen, after someone from Victoria’s Secret purchased the boots from the western store Kemo Sabe. Edmundson said singers like Katy Perry, Tanya Tucker, and Nahko Bear, and athletes like Cam Newton and Fallon Taylor have also worn her designs.

“Every time someone star worthy wears them, I don’t think that will ever get old,” she said. “It’s the best feeling in the world, and I try to be humble, but I’m really proud of it, you know?”

Edmundson is also proud to represent the Last Best Place in a world of fashion that often focuses somewhere else.

Thousands of boots later, there’s still someone Edmundson hopes get her hands on a pair of Cantys: Oprah.

Until that happens, she’ll be working out of her new store in Harrison. It opens June 15th, and there’s a celebration planned for that day.

There will be a bounce house for kids, a photo booth, and food and drink.

You can also purchase boots on her website, or send her your own to create a one-of-a-kind design.