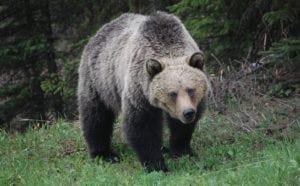 A grizzly bear was euthanized in the Sun River Valley on Wednesday after killing several calves.

The bear was captured at the site of the killings.

In addition, five other calves in the area went missing within the last week, according to FWP.

Wildlife officials decided to euthanize the grizzly due to the significant amount of livestock deaths. The decision was made in consultation with the U.S. Fish and Wildlife Service and in accordance with the Interagency Bear Committee guidelines.

The bear was the second grizzly to be euthanized in Montana in the past 10 days.

A sub-adult male grizzly bear was euthanized last Tuesday in the Helmville Valley due to livestock depredations.

FWP also recently released information concerning a grizzly bear that was shot and killed by a landowner west of Augusta on April 13.

Wildlife officials continue to remind landowners and recreationists to be bear aware as grizzlies are out of their dens along the Rocky Mountain Front.