Angie Olson has been running her nursery for over 20 years and met Brittainy Howk and her daughter Erin Howk last year when Brittainy started working for Angie.

“Erin had the most infectious smile. She’s got to be one of the sweetest girls you’ve ever met,” says Olson.

Erin was killed last Friday, when 31-year-old Jarred Parsons — who is accused of vehicular homicide under the influence — drove into her home in the middle of the night, killing her while she slept.

Parsons made his initial court appearance on Monday and is being held on a $500,000 bond. He is expected to be arraigned in court on May 23.

Learning of this tragedy, Olson took action to support the Howks and established a fundraiser for May 8​. The proceeds made from this event will go towards helping cover Erin’s funeral costs.

“Twenty percent of our proceeds that day will go towards Brittainy and her family. My employees are donating their wages for the day,” Olson explained. 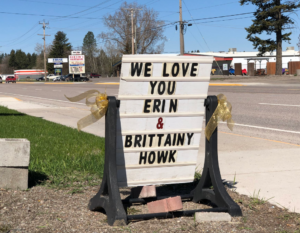 Before May 8, employees at Angie’s Greenhouse are showing their support by sporting gold ribbons in honor of Erin’s favorite color. Brittainy tells MTN why her daughter loved the color gold.

“The Outsiders was required reading for all junior high students. She was enamored and totally nutso about it, for a while and still kinda was. So it’s, ‘stay gold Pony Boy.’ That’s one of the quotes from the movie and the book. So, she’s all about that,” says Howk.

Howk is astounded at the amount of community support she’s received and tells MTN, “It goes to show how amazing we really are and it means a ton to me.”

Angie’s Greenhouse plans on another, fundraiser, a spaghetti dinner, for the Howk’s on June 8. Right now, Olson says they are looking at a location behind Eagles in Columbia Falls.

There is also a GoFundMe Campaign established for Erin. In just three days the GoFundMeCampaign for Erin raised over $7,000 with a goal of $10,000.