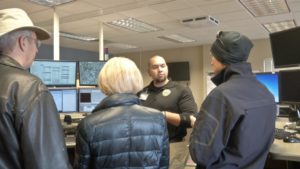 HELENA – Lights and sirens were the order of the day Saturday at the Helena-Lewis and Clark County 911 Center. The center welcomed dozens of visitors for its fourth annual Public Safety Open House.

The event was created as a way to educate the public about the job of 911 dispatchers.

“People don’t know a lot about what really goes on behind the phones and behind the radios,” said lead dispatcher Chanel Waples, who organized the open house. “This was our chance to open our doors to the public and showcase what we do as a profession, showcase what telecommunications is.”

Law enforcement, fire departments and other first responders also take part in the open house, bringing in some of their emergency equipment for people to view.

“We said, ‘Well, why not invite all of our public safety partners who we deal with on a daily basis?’” Waples said. “And this event has just grown from there.”

On Saturday, the Montana Highway Patrol brought in a helicopter and a mobile DUI assessment vehicle. There were demonstrations by Lewis and Clark County Sheriff’s Office K-9s and the True North Search Dogs. Lewis and Clark Search and Rescue volunteers practiced their rappelling technique from the roof of the 911 Center.

Dispatchers also brought people on tours of the communications center and answered their questions about what happens after someone makes a 911 call.

“We are your first contact when you are in a crisis, so we want people to see what we do, how we take that information, why we ask certain questions that we ask,” Waples said. “That information, depending on the event, is also sent to the first responders immediately.”

Waples said organizers are pleased with how much the open house has grown over the years.

“It’s become just such a great, great community event,” she said. “We’ve always had a lot of support from all of our first responders from the law enforcement, fire and medical community, as well as the community in general.”