HELENA – As the saying goes, life is too short to drink bad wine.

A group of Montana grape growers and winemakers hope theirs will soon be known as some of the best in the country, and even the world.

A push to make the Treasure State a major competitor in cold-climate grape growing is underway at the Montana Grape and Winery Association fifth annual conference. 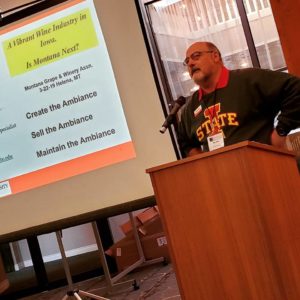 White cited an independent study done in Iowa in 2008. It found the full economic impact of wine and vineyards in Iowa was more than $230 million.

That year, wine brought in roughly 237,000 tourists and created around 1,700 full-time equivalent jobs.

When it comes to recreating the same economic impact in Montana, White, and others here in the state say, “Wine not?”

“You want the legislature involved, you want your universities involved, you want the industry involved, and then you also want the Department of Agriculture,” said White. “If you can get those four entities in, this thing will move very fast here. You have so many places with different micro-climates, I think you’re going to be able to produce some great wines here in Montana.”

White said contrary to popular belief, Midwestern states are a great place to grow grapes. There are hybrids that can handle the cold.

Plus, since there isn’t as much rain or fungus growth in semi-arid Montana as in other, wetter states, there is less risk of disease.

There are currently around 60 vineyards and 20 licensed wineries in the state, according to the Montana Grape and Winery Association.

A $130,000 USDA grant is also currently allowing the association to study vineyard management with the Western Montana Agricultural Research Center in Corvallis.

According to MTGWA board member Larry Robertson, Montana currently sits at 30 acres of grapes. In five years, he’d like to see 500 to 600 acres.

Similar to the craft beer industry that’s taken over Montana, Robertson hopes vineyards and wineries will also have a big economic impact in the future.