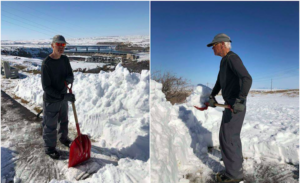 Dee Boggs Goss said she met a man shoveling the River’s Edge Trail by Rainbow Dam. She said he had already shoveled around a quarter of a mile.

When Goss asked the man why he was shoveling, he told her because “the city’s equipment is needed elsewhere.”

Another passerby called him the “trail angel,” according to Goss.