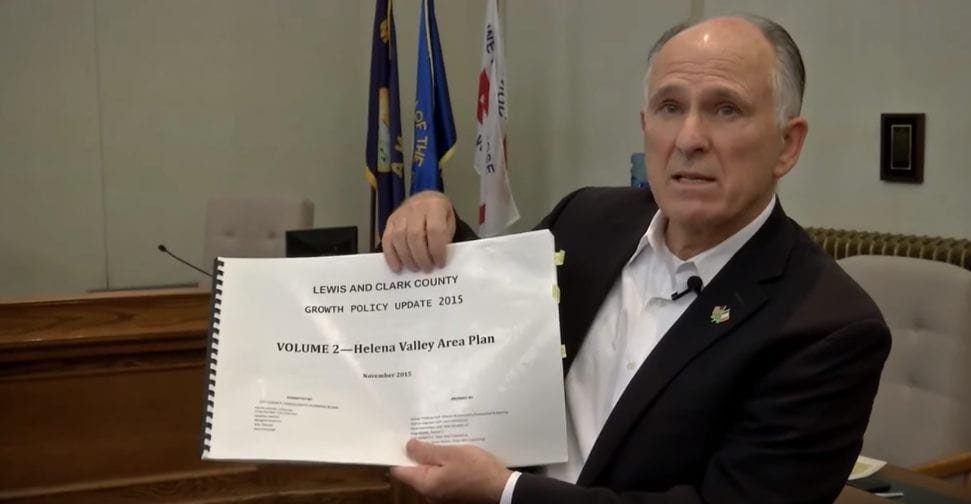 HELENA – Lewis and Clark County commissioners say, over the coming months, they plan to introduce a major update to the county’s zoning system.

Commissioners Jim McCormick and Susan Good Geise said when they started on the commission, they didn’t originally intend to tackle zoning rules. Since then though, they’ve concluded it’s an issue that can’t be put off.

“We have gotten to a point, because of density and because of projected growth in the Valley, we can no longer avoid that conversation,” McCormick said.

McCormick said the population and number of structures in the Helena Valley outside Helena city limits is now almost as large as inside.

“We have another city out there,” he said.

The county currently has 35 separate districts where so-called “Part I” zoning has been implemented. That means residents petitioned the county for zoning rules, often intended to narrowly address specific concerns.

“It is reactive in nature,” said Geise. “That automatically and inescapably sets up conflicts between developers and long-time residents.”

Now, commissioners say it is time to implement “Part II” zoning – zoning initiated by the county – across the Helena Valley. If the effort goes forward, it will be the first time in Lewis and Clark County that type of zoning is introduced.

“We want to make sure that when citizens in Lewis and Clark County invest what is probably going to be their biggest chunk of money – their biggest investment of their whole life – that that investment will be protected,” said Geise.

Part II zoning will exist alongside the current Part I zoning districts. In most cases, both will apply. If the two conflict, the more restrictive provision will apply.

“At the end of the day, we will have a baseline for zoning across the Valley,” said McCormick.

The county community development and planning department has already begun preliminary work on the new zoning proposals. The department answers some commonly asked questions about zoning on its website and in a handout called “The A-B-Z’s of Zoning.”

Commissioners say they do not want to impose the new zoning rules “from the top down.”

“It’s going to be very important that the county not dictate to the citizens of Lewis and Clark County about how zoning is going to happen,” Geise said.

They said they plan to work with and get input from community members, developers, realtors, business owners and other groups as they put the proposal together.

“We’re not just going to inform people what we’re doing; we are going to consult with people,” said Geise.

Leaders say these are just the first steps in addressing zoning, and the full process is likely to take months.

“We’re going to take as much time as we need to get it right; not quickly, but done correctly,” said McCormick.

Geise said she’s confident the process can be completed by 2020.