Montana Attorney General Tim Fox flew out of Bozeman Friday afternoon to be with him. 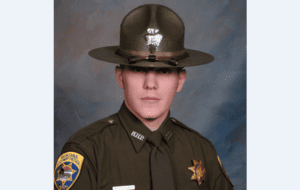 Trooper Alex Hiday was the next officer to arrive at the scene. Hiday found Palmer had been shot. He was still seat belted in his patrol car. The suspect had fled the scene.

Hiday and a Missoula police officer transported Palmer to an ambulance near the intersection of Highway 93 and Interstate 90.

Palmer is in critical condition at St. Patrick Hospital.

After an extensive manhunt, at approximately 6:15 a.m. the Missoula County Sheriff’s office took the suspect, Johnathan Bertsch, into custody without incident.

The Department of Justice’s Division of Criminal Investigation and the Missoula County Sheriff’s Office are investigating the shooting incident.

Palmer has been with the Patrol since 2012. He is stationed in Detachment 112 in Missoula. In 2015, he was awarded the Patrol’s highest honor, the Medal of Valor, for his heroic lifesaving efforts at the scene of a multiple-vehicle crash involving a mother and her young children in December 2014. Trooper Palmer has a wife and two young children.