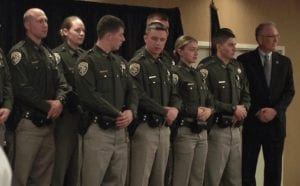 The men and women who graduated completed 20 weeks of rigorous training and many graduates received recognition in areas of physical fitness and academic leadership.

In a room full of family, friends, and loved ones, the troopers took their first steps in their careers after being sworn in.

Brennen Plucker was honored with the Michael Haynes Memorial Grant for his exceptional work in training. The award is in memory of State Trooper Michael W. Haynes, who was killed on duty in his patrol car, which was struck by a drunk driver in March 2009.

After being sworn in Plucker said, “Today’s important to me because this is the next step, this is the transition from my time in training to being out on the road and being able to make the impact that I set out do from the start.”

Plucker’s home station will be in his hometown of Bozeman.

The members of the 65th academy class include: