GREAT FALLS- Volunteer firefighters are used to saving lives, but it’s rare they have to save their own.

“I went in for my yearly checkup in November. At that time everything looked good,” Clary said.

It wasn’t until her doctor mentioned getting a mammogram that she decided it was time.

“It was deep inside where you weren’t able to feel it. I didn’t have pain, I wasn’t feeling sick or anything. I was normal,” Clary said.

She underwent surgery in January and is now prepping for the hardest next few months she’s ever imagined.

“If I would have waited one more year, it would have spread. They caught it just in time. They emphasized that I was one centimeter away from spreading,” Clary said.

The surgery removed 17 lymph nodes, six of them were cancerous. Doctors also took out a tumor that was four centimeters big.

Now, she’ll attend four sessions of chemotherapy once every 21 days.

But aside from the medical procedures, her biggest fear is losing her hair.

“It’s a shock. You know you’re losing your hair. A lot of women, that’s their main prettiness. Losing it is very hard. My head is sore, like somebody is pulling it,” Clary said.

With her family by her side, she says she will get through this.

“A buddy of mine and I got together and we decided that we can’t do this for her but we can do this part with her. We both shaved our heads and mine will stay this way until hers starts coming back,” Carl Clary, Guadalupe’s husband, said.

And as Guadalupe shares her brave story with the world, she wants to send a message.

“Women especially, don’t wait for the mammogram. Get it done,” Clary said.

There will be a fundraiser for the Clary family in March. The family welcomes everyone. 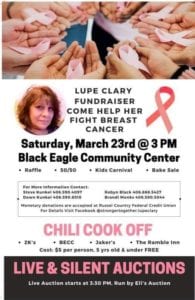 EVENT: Help Guadalupe fight her battle by attending this fundraiser. There will be a raffles, bake sale, kid’s carnival, chili cook off, live and silent auctions and much more. Tickets are $5 per person. 5 years old and under are free.