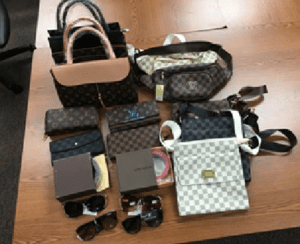 EASTPORT, IDAHO- U.S. Customs and Border Protection officers said Tuesday a truck with counterfeit designer handbags was caught in northern Idaho with the intent to distribute the purses in Canada.

Officers at the port of Eastport, Idaho, discovered the suspected counterfeit merchandise in the cab of a commercial vehicle.

According to a release, the counterfeit merchandise was found during an inspection of the truck cab, when the driver was exiting the United States and attempting to enter Canada.

The driver also had an outstanding warrant out of Georgia for failure to appear on an assault charge.

The retail price of the counterfeit merchandise was $32,900.

After additional questioning, the driver of the truck admitted the items were counterfeit and he intended to sell them in Canada.

An import specialist said the items were counterfeit and they should be seized for infringement of the manufacturers’ intellectual rights.