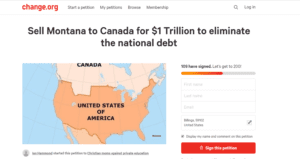 A Change.org user has proposed a way for the Treasure State to live up to its name.

A user named Ian Hammond posted a petition to the site proposing the following: Sell Montana to Canada for $1 trillion to solve the national debt.

“We have too much debt and Montana is useless. Just tell them it has beavers or something,” the user wrote in support of the petition.

Change.org is a petition website that allows users to garner support for whatever cause they’d like. Some have been serious (a 2012 effort to prosecute of Trayvon Martin) and other light-hearted (a 2013 petition demanding Brian the dog return to the TV series “Family Guy”).

The petitions, in case it’s not clear, carry no real authority

As of Monday evening, the petition to sell Montana had 109 signatures.

We’re guessing it’s because most people already know that Montana is priceless.