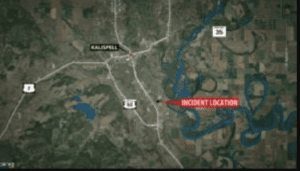 KALISPELL- A 22-year-old man has been arrested in connection with a report of “multiple shots fired” in the area of Valley and Willow Glen drives around 7:30 p.m. Thursday.

Heino says only one person is believed to be involved in the incident, and a SWAT team along with a negotiator was called in.

The man was taken into custody around 8:15 p.m., and Heino says the area is now safe. Few details were immediately available.