BOZEMAN – Fliers promoting a group labeled as a white supremacist organization by the Anti-Defamation League (ADL) were spotted in Bozeman over the weekend. 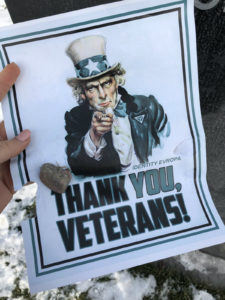 Identity Evropa appears to be racially motivated, though they claim on their website that they are not a white supremacist group.

The group also posted fliers in Billings, including at Montana State University-Billings and the KTVQ building,  and Missoula last month.

MSU News Service Director Michael Becker said in a statement, “Montana State University strongly rejects the supremacist views espoused by Identity Evropa, and we affirm our institutional values based on respect for the dignity of every human being.”

Bozeman police say the fliers in and of themselves are protected speech and not illegal.

“As long as it’s done in a public space, it’s protected activity. If people are trespassing to do these things then there can be issues with that that we can investigate. There can be crime motivated by hate and those are things we can take action on, but merely speech-related items like this, the Constitution protects that and we are sworn to uphold that,” said Bozeman Police Chief Steve Crawford.

According to the ADL, Identity Evropa is “is a white supremacist group focused on the preservation of ‘white American culture’ and promoting white European identity.” The ADL says the group’s slogan—”You will not replace us”—is reflective of Identity Evropa’s racial views:

IE’s slogan, “You will not replace us,” reflects its belief that unless immediate action is taken, the white race is doomed to extinction by an alleged ‘rising tide of color’ purportedly controlled and manipulated by Jews.

The group has been posting fliers across the U.S. in the past few days in places such as New Jersey, Illinois, and California.