HELENA- The minimum hourly wage for Montana workers will go up to $8.50 beginning on Jan. 1.

“Every Montanan who works hard should have the opportunity to get ahead. We’re among a handful of states where each year minimum wage workers take home a little extra in their paychecks, but there’s more to be done,” said Gov. Steve Bullock in a press release. “We must continue to help working families succeed by bringing in better jobs, helping businesses expand and investing in areas like apprenticeships and education.”

Montana law requires that the state Department of Labor & Industry to adjust the Montana minimum wage for inflation based on the consumer price index.

An estimated 8,200 Montana workers, or 1.8 percent of the workforce, received hourly wages less than $8.50 per hour in 2018 and are likely to receive higher wages next year, according to the Montana Department of Labor and Industry.

In 2017, the industry with the largest number of workers earning minimum wage was the accommodations and food services industry, followed by the retail trade industry. Food Preparation Workers and Sales are occupational groups with a large number of minimum wage workers.

The minimum wage is determined by taking the current minimum wage of $8.30 and increasing it by the inflation hike increase from August 2017 to August 2018.  The index increased by 2.68 percent over the year ending August 2018.

To keep the minimum wage at the same purchasing power as the prior year, the wage should increase by $0.223 per hour. The resulting wage is $8.523 and statute specifies that the wage must be rounded to the nearest 5 cents.

Here are the current minimum wage rates for each state, according to the U.S. Department of Labor: 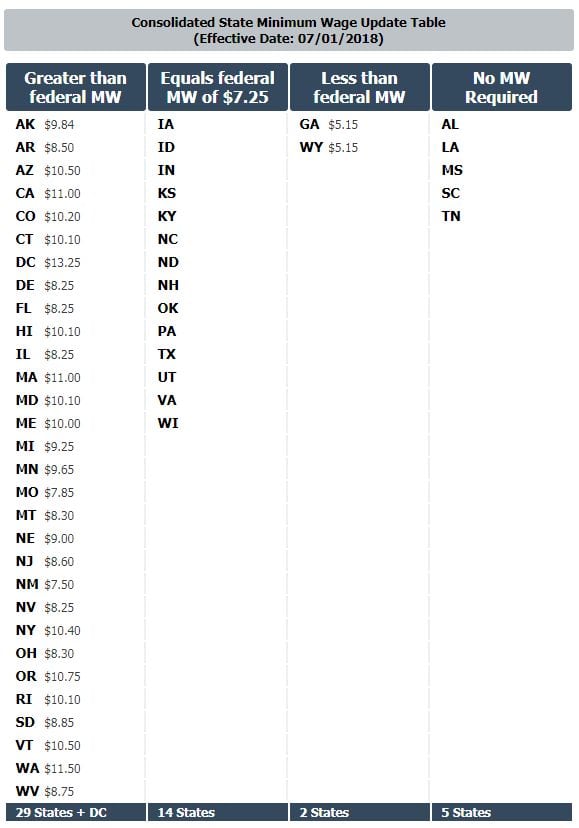