Where the jobs are: Montana’s economic landscape, visualized 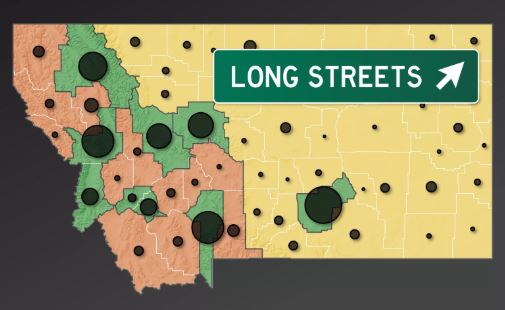 Spread out Montana’s 676,000 jobs evenly, like sprouts in a Kansas cornfield, and each worker would have 140 acres to plow. But the state’s economy, like its topography, isn’t particularly flat.

Just as the landscape directs where we can build homes and businesses, economic geography shapes our lives. It tends to define the opportunities Montanans have — or long for — as we try to make a decent living, support our families and invest in our communities. It’s a major focus for elected officials, business leaders and everyday Montanans, who make growing and sustaining job opportunity a key part of our public policy and politics. As the saying goes — you can’t eat the scenery.

But what does all our talk about jobs and the economy get Montana workers in a state where wages have risen with low unemployment in recent years, but are still painfully modest, at just 72 percent of the national average?

The graphics that follow, the first installment of the Long Streets reporting project, are an effort to begin answering that question, using the most comprehensive county-level job data available from the U.S. Bureau of Economic Analysis. This broad overview of the jobs landscape, and the insights it reveals, serves as the backdrop for further exploration into the state’s economic future to follow in the weeks ahead. 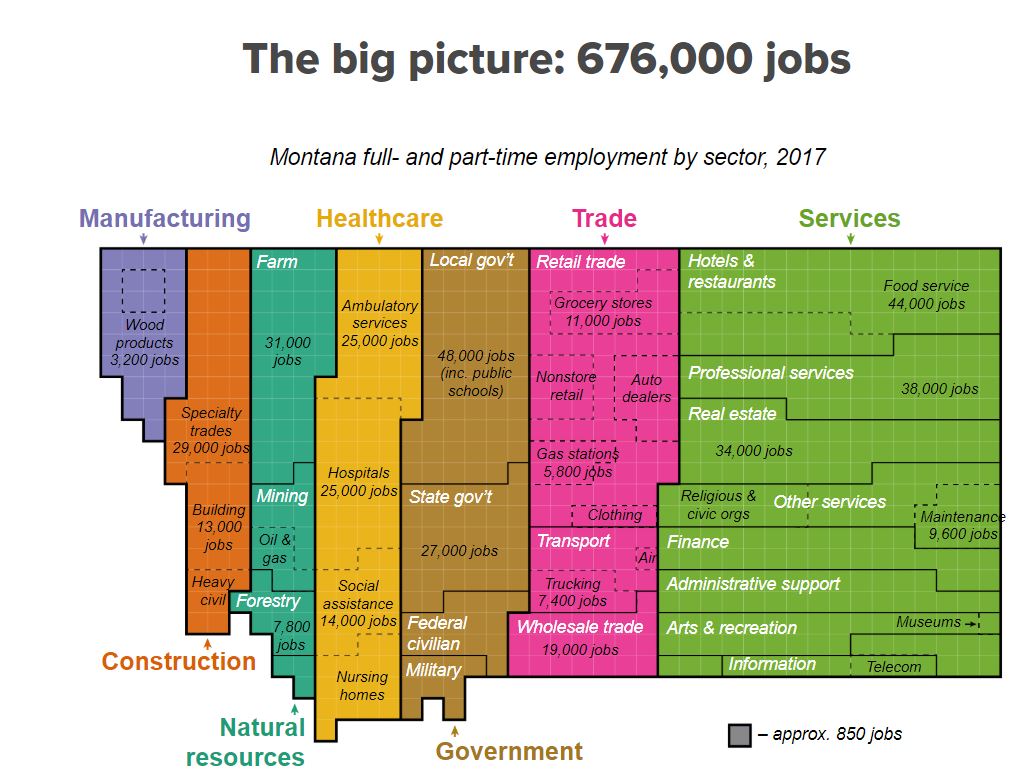 The largest share of Montanans work jobs in the service sector, a broad category of employment that includes minimum-wage earners as well as software engineers and other trained professionals. Though the state economy is still anchored to its natural resources, farming, mining, and logging make up less than 10 percent of all jobs. 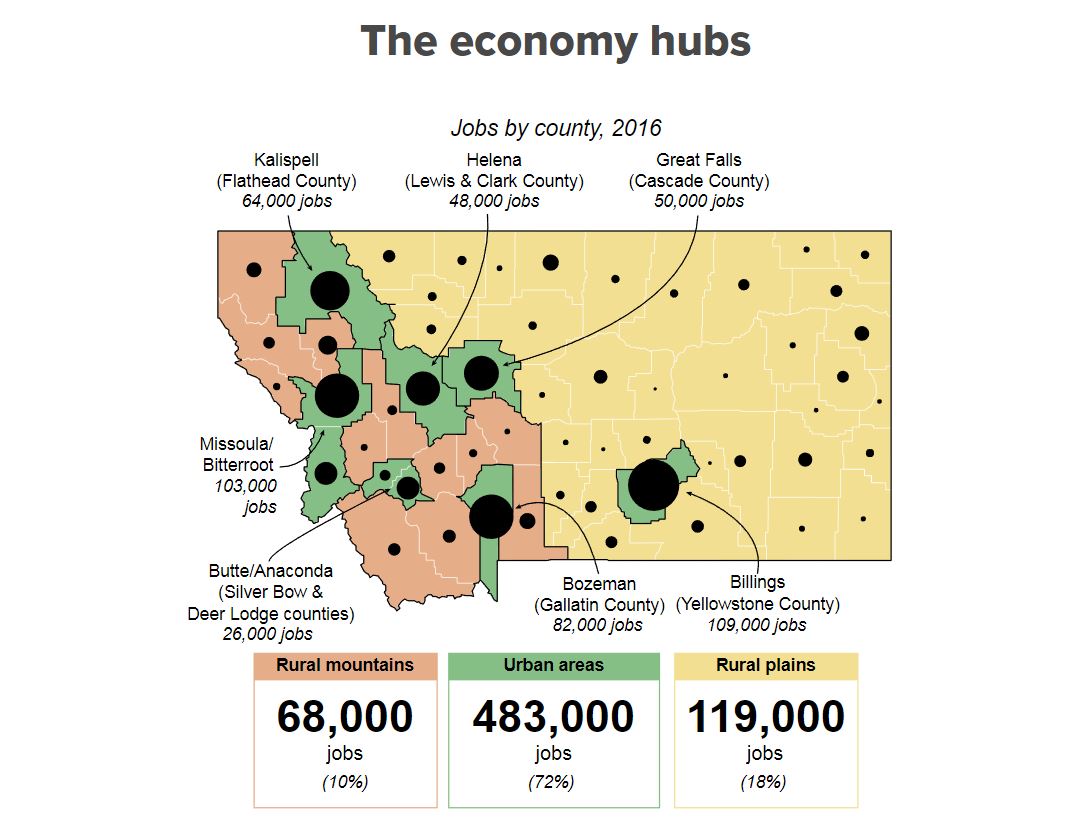 Montana may be a rural state, but its jobs are clustered around seven urban centers: the cities of Billings, Missoula, Bozeman, Kalispell, Great Falls, Helena, and Butte. Those hubs, which encompass nine of Montana’s 56 counties, include 72 percent of the state’s jobs and 68 percent of its people.

Rural areas have fewer residents and fewer jobs. The total number of jobs spread across the 35 plains counties east of the Rockies, for example, was about 119,000 in 2016 — compared to 109,000 in Billings alone.

Job growth is even more concentrated. Five counties — around Bozeman, Billings, Missoula, Kalispell, and Helena — have accounted for 70 percent of net job creation between 2001 and 2016, the most recent year with county-level data available.

Bozeman leads the way, having added 27 percent of net new Montana jobs since 2001. Gallatin County has also grown by more than 34,000 residents during the same period. Its growth is typically attributed to the city’s combination of economic opportunity and quality of life — the economic opportunity fueled by Montana State University’s enrollment gains, tourism and an expanding technology sector. More than half of new Gallatin County jobs are in the service sector, BEA data show.

It’s a different story in Great Falls, where healthcare industries created the lion’s share of new jobs. Healthcare employment is an economic bright spot in most parts of the state, adding 75,000 jobs over 15 years. Rural plains counties appear to have seen job losses in healthcare and government, but limitations on federal data make it difficult to draw conclusions in those regions.

Where employment has grown 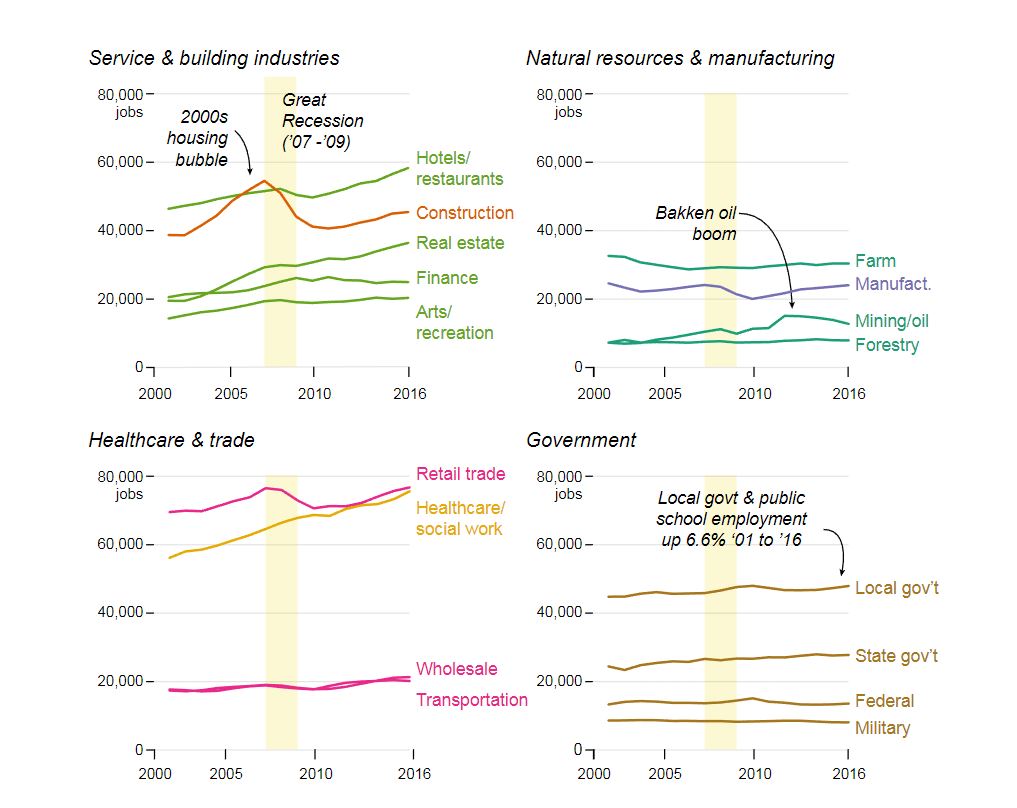 Construction and retail are still recovering from the Great Recession, which cost Montana 13,900 construction jobs between 2007 and 2011. Healthcare and government sectors, in contrast, weathered the downturn without job losses.

With the exception of mining, natural resource employment has generally stagnated so far this century. Even so, after an upward swing spurred by the Bakken oil boom, mining job numbers have dropped 16 percent since the 2012 peak.

What the growth industries pay 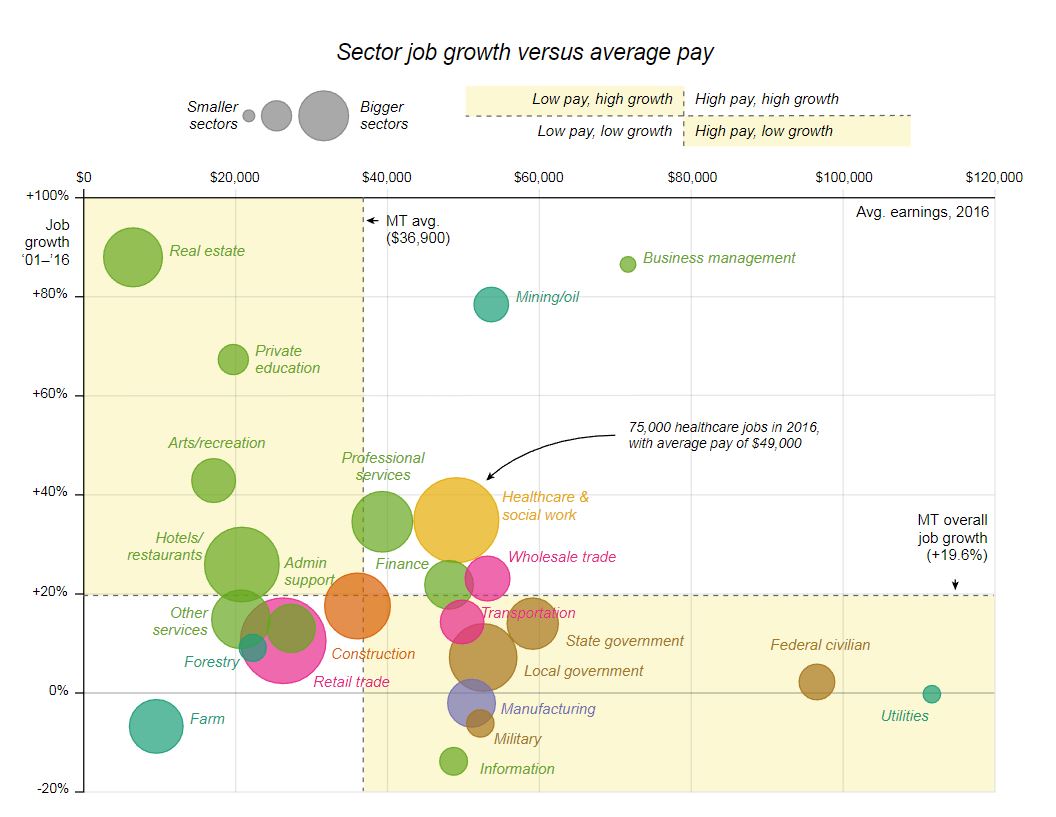 But what do all these new jobs pay? While service-sector jobs are plentiful, component industries including real estate, arts and recreation, and lodging post low average wages. Some of those jobs just don’t pay well, while others skew toward part-time positions. On the other hand, many higher-wage industries — transportation, manufacturing, and government — aren’t producing many new jobs.

The sweet spot lies in industries that are growing and pay well. In recent years, mining and healthcare have stood out. The healthcare sector, in particular, paid Montana workers an average of $49,000 annually while adding nearly 20,000 new jobs.

The Montana Department of Labor and Industry, which publishes annual job growth projections, expects healthcare to be the state’s fastest-growing industry in coming years, adding a projected 1,200 jobs each year through 2027. The department anticipates that mining employment will remain flat. 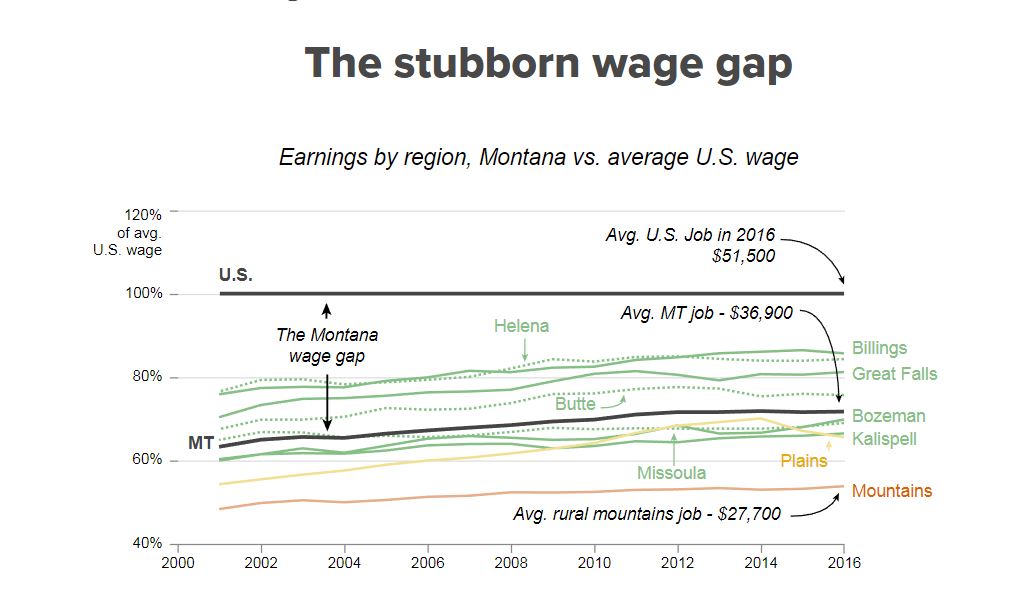 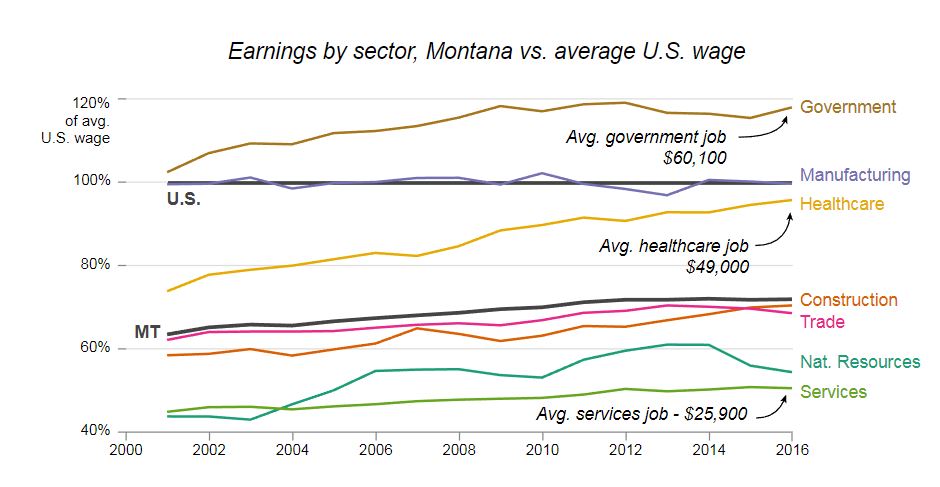 Workers across Montana have long contended with low wages compared to their counterparts across the nation. The gap has closed somewhat over the past 15 years. Fortune has favored city dwellers. While the average job in Billings paid $44,100 in 2016, the average in the state’s rural mountains was $27,700.

Bozeman and Missoula have fared well in terms of overall job growth, but their typical wages are actually below the state average — $35,900 in Bozeman and $35,500 in Missoula (including Ravalli County).

Only one Montana employment sector, government, pays a typical wage above the nation’s economy-wide average. (Government jobs, says the Montana Department of Labor and Industry, are more likely to be full-time professional positions than most other sectors and often come with higher education requirements.) 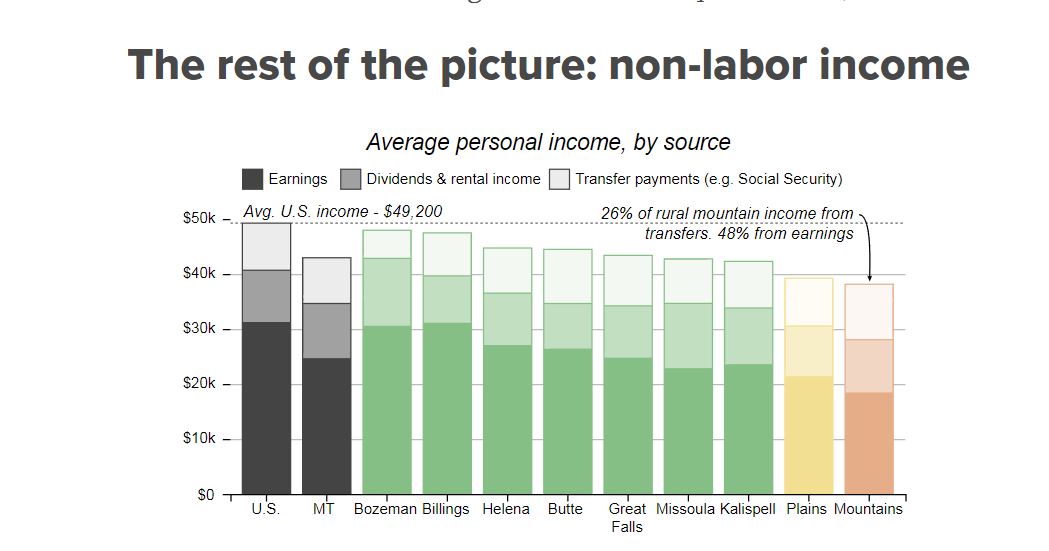 Job-based earnings are far from the whole picture for the state’s economy. They represent just 57 percent of the average Montanan’s $42,900 in annual income. The rest of the income comes from investments, including rental income, and payouts from government programs such as Social Security and Medicaid.

Investments and government transfers are particularly important in rural Montana, where they help offset lower earned income. In western mountain counties, less than half of all 2016 income came from wages or business ownership.

On a final note

Have questions about the stories behind these figures? We’d love to hear from you. If you want to encourage us to look into something in particular, or have some insight that might be helpful, contact us at staff@longstreetsmt.com.

Sign up for our email newsletter if you want to follow along, too — the next installments in our Long Streets Project will explore economic realities and opportunities that go beyond the numbers.

This work is supported in part by a grant from the Greater Montana Foundation, which encourages communication on issues, trends and values of importance to Montanans. The story and visuals are available for republication by media outlets — see details here. 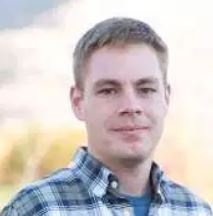 Eric Dietrich is an independent journalist and data designer based in Montana. He has worked for the Great Falls Tribune, Bozeman Daily Chronicle and Solutions Journalism Network.

Thanks to Patrick Barkey of the University of Montana Bureau of Business and Economic Research and Chris Mehl of Headwaters Economics for providing feedback on earlier versions of these graphics. Detailed data citations and the code used to produce this analysis can be found here.

About The Long Streets Project:

Montana, as the saying goes, is one big small town with really long streets.

The state’s communities, from Libby to Helena to Ekalaka, have plenty in common when it comes to the issues facing their future. Even so, Montana’s wide geography sometimes makes it hard for us to learn from our neighbors. Journalism is one of the best tools we have for bridging that distance.

The Long Streets Project focuses on issues and trends facing Montana’s economy: examining where Montanans can and can’t find decent jobs, investigating how public policy decisions have panned out and exploring how economic constraints shape our communities.

Made possible by a $10,000 grant from the Greater Montana Foundation, we are publishing a series of narrative and multimedia stories in partnership with the Montana Free Press starting in November 2018 and continuing into 2019. Each piece is available for free republication by newspapers and other news outlets across the state.

With the help of readers like you, we’re hoping to spur productive conversations about what Montanans can do to build a healthy economy and stronger communities. You can follow along by subscribing to our weekly-ish newsletter or chiming in on Facebook or Twitter. We’re all ears if you want to drop us a line and suggest our next story idea, too.