Bozeman computer museum gets a boost from surprised visitor

BOZEMAN, Mont. – The Museum of Computers and Robotics, near the Montana State University campus in Bozeman, is the world’s oldest museum devoted strictly to computers. It’s also one of the few computer-only museums in the world.

Open six days a week with free admission, the museum, run by robotics expert, George Keremedjiev, recently got a boost from a well-known Harvard software engineer.

Andromeda Yelton was in Bozeman to speak at MSU. She had a couple of hours to kill before catching a flight home, so she took the advice of a local and dropped by the museum.

“I got there and was just blown away,” said Yelton, who says she was pleasantly surprised after she arrived at the hard-to-find location. “It doesn’t really look like a museum from the outside.”

“People come in not knowing generally what to expect,” he said.

“As I kept walking around the museum, my mind kept being blown,” Yelton told MTN News, adding, “There are these rare computing artifacts that are just capturing seminal moments in the history of computation.”

An Apple One computer is being offered at auction right now for big bucks. The Bozeman computer museum won’t need to bid. It has one. A gift from Apple co-founder, Steve Wozniak. 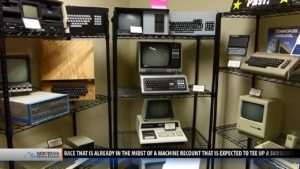 The only surviving computer that was used to land a United States astronaut on the moon is in the museum. Yelton says it’s amazing what was accomplished with the technology available in 1969.

“The phone in your pocket, which is just like orders of magnitude more powerful than the computer that took us to the actual moon,” she said.

Way before the moon landing, the first computers started to come alive in World War II, then electronic computers were born in the United States. They were room-sized giants that couldn’t compete with a wristwatch these days. You can learn about them all at the museum.

There’s a special room dedicated to women in computing. Yelton posted a selfie of herself in the room, posting: “Yes, I am totally taking a selfie in this particular exhibit.”

There’s also a section devoted to early computer games, including one that dates to the 1930s. Yelton liked that too. She said, “Games are what motivates so many people to learn.”

Nearly every exhibit has three levels of information. A brief explanation, then a more in-depth take on the history of a given item and finally a deep dive into the details. Keremedjiev said that makes the exhibits unusually user-friendly.

“All of this is understandable and you don’t have to be a geek,” he said.

Some of the rarest items in computer history are at the Bozeman computer museum. But the goal goes way beyond trying to preserve these relics from the past.

“It underscores that computers aren’t just things that descend from on high fully formed, like people built them,” Yelton said. “People had fun soldering these things together in their garages.”

The museum even looks toward the future with a quantum computing section.

Keremedjiev said once that technology is perfected, “it’s going to turn computing as we know it on its head.”

Yelton’s tweets and photos from the museum brought the institution some welcome attention and gratification to the programmer who said it had: “This sort of surprise twist ending where the museum joins Twitter and now they have lots of followers and its super fun and heartwarming.”

She also noted: “The museum says that’s only like 6 percent of their collection so honestly, they should get a bigger space and then I should spend all day in it.”

Keremedjiev said he’s working on that and hopes to open a bigger and better museum in its own building in Bozeman soon.