Boyce Schall of Arlee was visiting Yellowstone National Park this week when he captured on video a bull elk knocking over a man.

Schall says that two bull elk were fighting; the video shows one of the elk walking across a street where a small crowd of people had gathered to watch.

Schall says in the video that the elk appears to be heading back toward his cows.

The elk then charges through the group, knocking over one man.

The man did not appear to be seriously injured.

Schall ends the video by saying, “That guy got nailed.”

Yellowstone National Park confirmed that the incident happened on Thursday.

Park regulations state that when an animal is near a trail, boardwalk, parking lot, or in a developed area, people must give it space.

Park officials say to stay 25 yards away from all large animals – bison, elk, bighorn sheep, deer, moose, and coyotes and at least 100 yards away from bears and wolves. If need be, turn around and go the other way to avoid interacting with a wild animal in close proximity.

Getting too close to wild animals can be dangerous – and also lead to criminal charges. 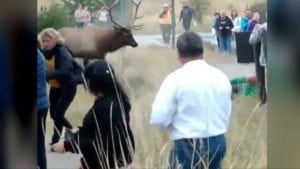