TOWNSEND – When it comes to components for industrial machines, Montana Hydraulics owners Mark and Della Ehlke say there isn’t much they can’t make.

“We’re able to pretty much take on just about anything,” Mark Ehlke said. “In fact, we had a tagline at one point: ‘If you can imagine it, we can build it.’”

At its shops in Helena and Townsend, Montana Hydraulics machines and fabricates complex metal parts that go on to be used in equipment for mining, oil and gas, railroads, timber and other industries. While the work they’ve done might not always be easy to see, the Ehlkes say it’s helping machines across the state – and the country – run.

“We take great pride in producing a product here in Montana,” said Mark Ehlke. “We cover most of the U.S. We export north of the border. We employ Montana people, our neighbors.”

In addition to machining and fabrication, Montana Hydraulics works closely with railroads on systems to distribute ballast rock, used to secure train tracks. The company employs a number of field technicians who travel with railroad construction crews to address any problems with the systems.

Montana Hydraulics was founded 20 years ago, when a group of businessmen restarted production at the Helena shop. One of the original owners, Della Ehlke’s stepfather, brought the couple into the business. After several years, they took over as principal owners.

The Ehlkes say their business has grown dramatically since they joined the company.

“When I first came here, we had four field technicians servicing the rail cars, and we now have over 20,” said Della Ehlke.

At the Helena shop, Montana Hydraulics mills precision connections for hydraulic systems. They can use computerized cutting tools, to ensure each piece has exactly the right shape.

The company also assembles and sells machinery of its own, like dowel mills designed to produce fence posts and other round wood products.

The Ehlkes purchased the Townsend shop several years ago, and began making renovations so the building could hold heavy equipment.

“The process has been a little slower than we would’ve liked, but we are up and going,” said Mark Ehlke.

About a year ago, they brought in a new laser cutting machine. It can cut cleanly through up to an inch of steel, and its computer-guided cutting head allows it to carve out intricate pieces in seconds.

“It raises the bar for us, as far as our abilities and capabilities,” Mark Ehlke said.

The laser cutter reduces the amount of finish work that has to be done to get a piece ready for use, saving time and labor.

In recent years, Montana Hydraulics has become especially well-known for their prototype products for the railroad industry. Tracy Leibbrandt, the company’s ballast field supervisor, said in many cases, those designs arose out of issues spotted by their own field technicians.

“Being able to identify a problem, bring it back here, work with all the talent we have in this organization and end up with a product back out in the field in operation, is pretty exciting,” he said.

One of the most successful products has been the bi-directional ballast plow, which levels ballast rock around the tracks. Leibbrandt said the plow is now built into about 200 rail cars around the country.

Montana Hydraulics is still looking to innovate. They are currently working on a new tarping system, to keep ballast dry so it can be used for emergency track repairs in the winter.

“It’s awfully exciting to see the ideas that our people are able to come up with,” Della Ehlke said.

Today, Montana Hydraulics employs about 40 people. Half work in the Helena and Townsend shops, while the rest are field technicians who work around the U.S.

The Ehlkes say they use Montana equipment whenever they can. They say being “Montana Made” has a lot of importance for them.

“My proudest stuff is just the ties that we have to this area – to this state in general – and that our people are committed to this area as well,” said Della Ehlke.

You can find more information about Montana Hydraulics at their website, montanahydraulics.com. 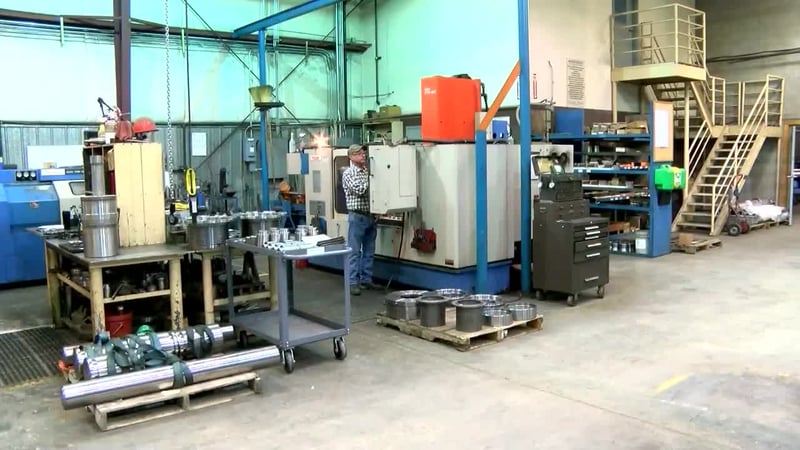