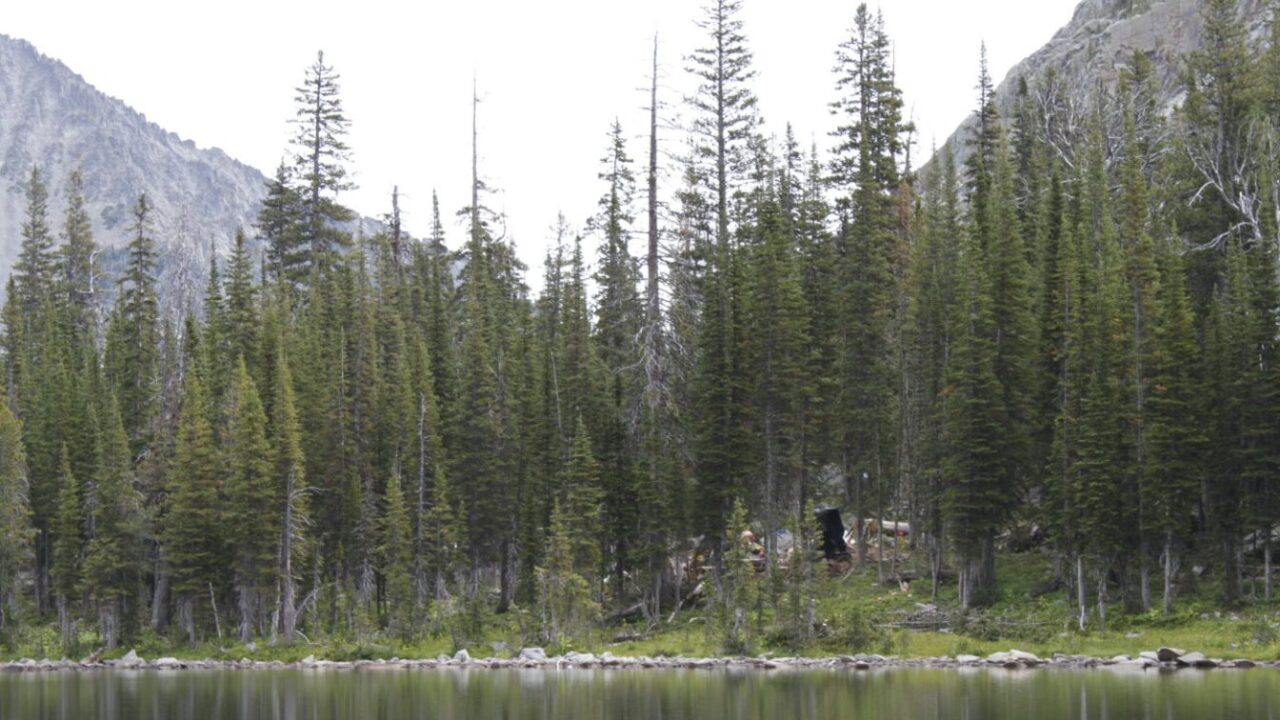 A Sept. 6, 2019, photo taken from the Big Timber Creek Trail shows construction on the shore of upper Twin Lake in the Crazy Mountains. 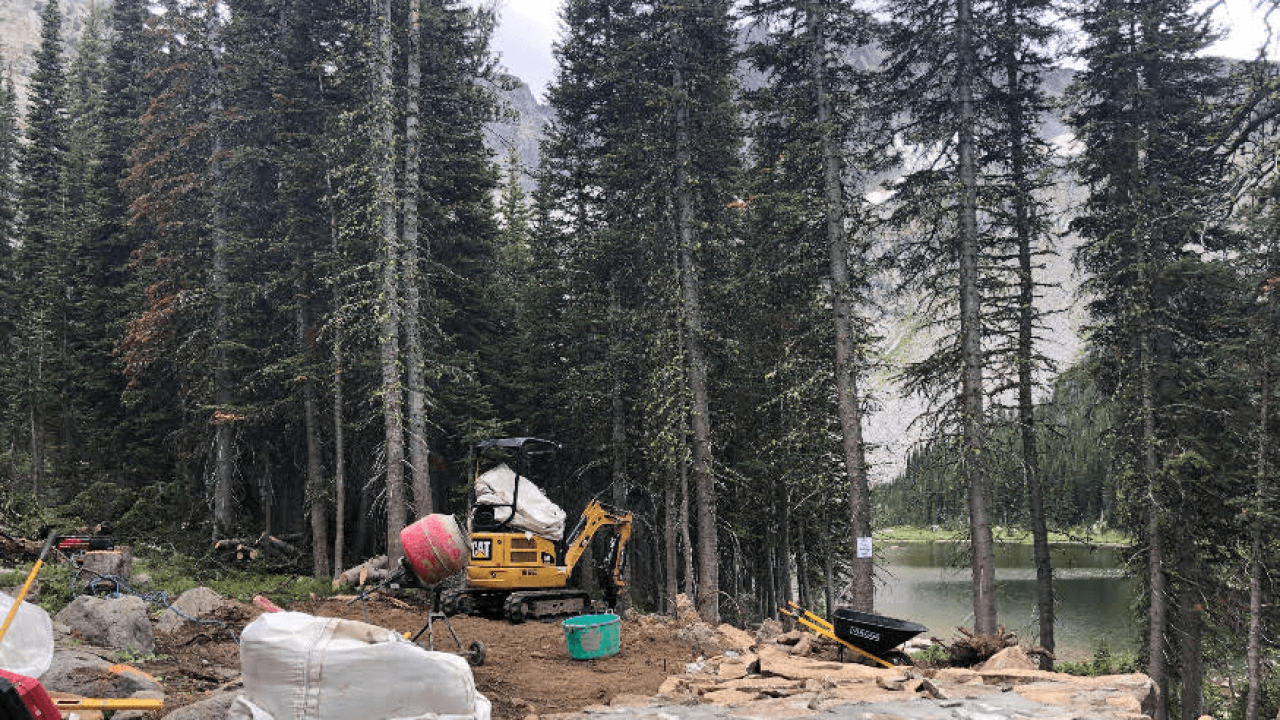 Livingston — What wilderness advocates and members of the Crow tribe called a “nightmare” scenario in Montana’s Crazy Mountains appears to be coming true, and sooner than they thought.

Construction was recently underway on a private inholding near Twin Lakes, which lies in a roadless basin at an altitude of over 8,000 feet, five miles from the Big Timber Creek trailhead on the range’s east side.

The construction represents the first known development in the high-elevation heart of the Crazies in modern times and, according to wilderness advocates, poses the most serious threat in decades to the range’s character as a remote sanctuary for wildlife and people.

“Until now there was an understanding somehow, whether spoken or unspoken, that these mountains represented a chance to escape,” said Shane Doyle, an educator and Crow tribal member who serves as a liaison between tribal leadership and the Forest Service. “Now, downtown Bozeman is coming to Big Timber Canyon.”

The development comes as the Forest Service prepares to finalize its once-in-a-generation revision of the Custer Gallatin National Forest management plan, which will govern management and land use in the Crazies, and on the rest of the 3-million-acre forest, for the next 30 years.

Though the range is mostly roadless and trail-less, the current forest plan, instituted in 1987, does not protect any part of the Crazy Mountains as recommended wilderness. For the plan revision, the Forest Service is considering alternatives that range from maintaining the status quo to recommending nearly 60,000 acres in the Crazies for wilderness designation — a status that would deter development, road building, and motorized and mechanized use on National Forest lands in the mountains’ interior.

In a press release issued Monday, the Crow Nation raised the alarm about development in the high-altitude Crazies and called again on the Forest Service to consider the tribe’s historical and spiritual connection to the range and use the forest plan revision to protect the mountains from further development.

In early September, a small backhoe, a cement mixer, and a stone and concrete slab could be seen on the shore of Upper Twin Lake, in the shadow of Granite Peak.

The construction appears to be on private land deeded to the Switchback Ranch LLC, a company that in 2012 purchased the historic Lazy K Bar dude ranch from the Van Cleve family, which had operated it since 1922. The website of the high-end ranch realty company Hall and Hall values the 8,500-acre Lazy K Bar at $9 million.

The Switchback Ranch, which also owns a large swath of property on the Montana-Wyoming border, is owned by David Leuschen, cofounder and senior managing director of the private equity firm Riverstone Holdings.

Montana Free Press left multiple unreturned messages with the Lazy K Bar Ranch seeking comment, and reached two ranch employees by phone, both of whom declined to respond to questions.

Montana Wilderness Association Senior Field Director Emily Cleveland, who said she has seen the construction site firsthand, said it’s unclear what the development will be when completed, but that it appears to be legal.

“It just demonstrates the vulnerability of the Crazies,” Cleveland said.

Unlike most Montana mountain ranges, the Crazies are checkerboarded with private inholdings — a legacy of the every-other-section land grants given by the federal government to the Northern Pacific Railroad to subsidize the railroad’s construction. The Switchback Ranch now owns many of these high-altitude, alpine lake sections, including Crazy Peak itself.

While the public has little recourse to protest what happens on private land in the high Crazies, Cleveland said, the Forest Service could incorporate protections for public lands in the range into the revised Custer Gallatin Forest plan. For example, building a road to access the private land near Twin Lakes would require an easement across National Forest land — an easement the Forest Service could approve or deny.

“The Forest Service is required to provide reasonable access to private inholdings,” Cleveland said. “Without protection, it wouldn’t be unreasonable to build a road into those inholdings when they’re developed. It would be a lot less likely for them to build a road if the public sections get recommended wilderness designation.”

Also, she said, Forest Service clarification that these remote private sections won’t be accessible by vehicle might affect whether or how landowners choose to develop them.

“It will erode that wild character and eliminate chances for it to be protected [as designated wilderness],” she said.

Motorized-use advocates and others oppose wilderness recommendation in the Crazies and argue that the Roadless Rule, adopted by the Forest Service in 2001, is enough to prevent new roads in inventoried roadless areas like the inner Crazies.

Cleveland said the Roadless Rule includes exceptions for road construction for “outstanding rights” of access, including access to private inholdings. Wilderness recommendation, likewise, does not prohibit road development outright, she said, but does include important protections beyond the Roadless Rule, including a requirement that forest managers consider impacts to “wilderness character” before issuing an easement.

Speaking to Montana Free Press in June, Montana Wilderness Association Senior Conservation Advisor John Gatchell warned of the possibility that landowners would develop the roadless, high-altitude heart of the Crazies. At the time, he anticipated such development was years in the future, not weeks. So when Gatchell learned of the new construction in late August, “it was a jolt,” he said.

Joseph Bullington is a freelance writer based in Livingston. He grew up in the Smith River watershed near White Sulphur Springs. Email him at GestureWildly@protonmail.com.