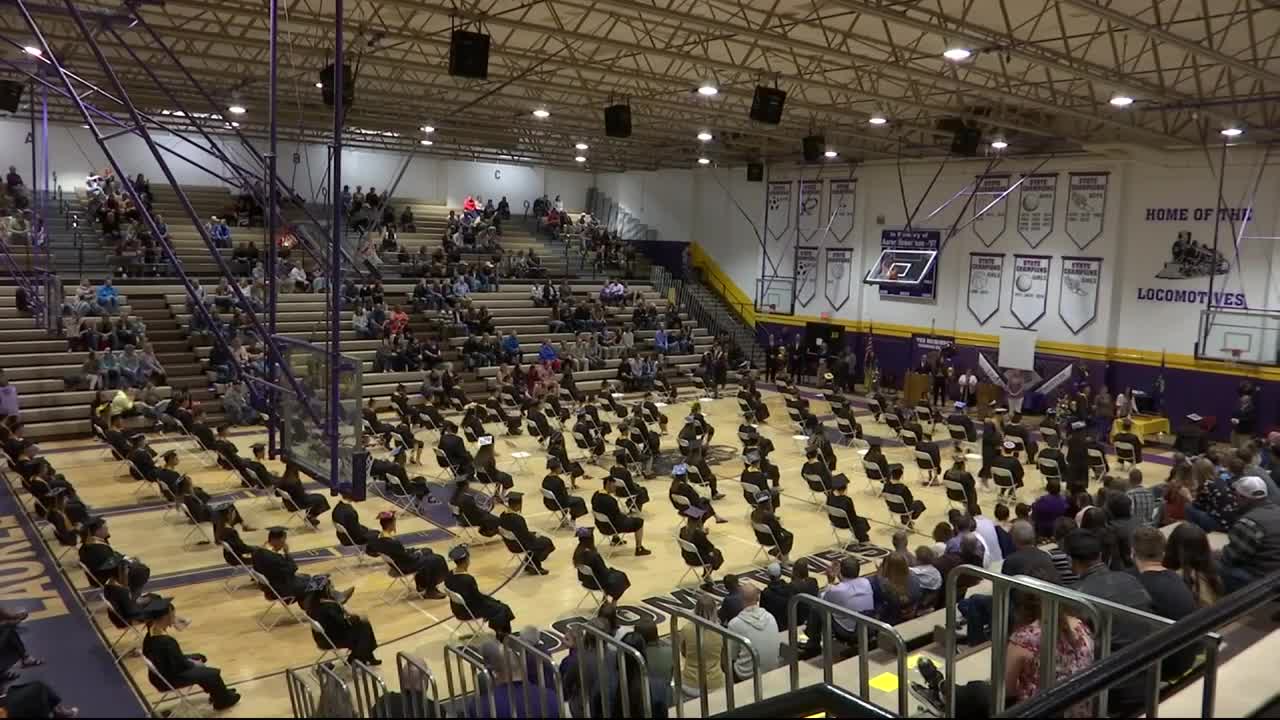 In Laurel, administrators battled the weather and electricity. The ceremony was previously scheduled to happen on the football field outdoors, but had to be moved inside after a weekend of rain. On top of that, a power outage happened about a half hour before the ceremony causing a slight delay.

“The motto of the year is ‘adapt and overcome,'" said Laurel Schools Superintendent Linda Filpula. "Who could predict that you are going to loose your lights in the gym. It’s a good life lesson for kids. As you go out in the world, things are going to happen in life and you need to learn to adapt and overcome.”

The ceremony in the Laurel gym had assigned seating for onlookers. Each student was given four tickets to the ceremony that they gave to family members. As well, there was no band to play the graduation standard "Pomp and Circumstance."

While the ceremony was different than years before, the recognition of a passing grade was important to Laurel senior Britnee Atkinson.

“I’m really grateful we did have some sort of recognition and an ending to high school," Britnee said.

“The ceremony was a little different. There were a lot less people in the auditorium. But I’m really glad that Laurel put forth the effort so that the graduates could graduate this year and have a ceremony. Because they’ve worked hard for it and it’s been a crazy last couple of months," Emilee said.

The Laurel class of 2020 is 116 members strong. Principal Zahara said the class has had to persevere through tough times over its four-year stint in high school.

“This class in particular has had some very significant hardships along the way. And this is to honor their perseverance, their ability to move forward in spite of tragedy, trials, tribulation and be successful," Zahara said.

Billings Central also had a shortened, socially distanced graduation ceremony. The Catholic mass that's usually held ahead of the ceremony was cut from the program. Only the immediate family members of students were allowed to attend with assigned seats for those in the crowd.

Once again, the students were happy to be there, get their diplomas and see friends one last time before college, work or the military.

“It was really nice. I was happy we got to have a graduation ceremony, because for a while we thought we weren’t going to be able to have one. So it is nice to have one and be with all of my classmates," said Ainslee Button, a Billings Central graduate in the class of 2020.

Speakers at Central dubbed this class the "corona class of 2020," but not in a negative way. The moniker instead represents perseverance and positive change.

“We’re the class that is going to go out in the world after this and change it for the better. We’re going to be the ones that didn’t let this coronavirus stop us. We’re not going to let this bring us down in any sense," Ainslee said.

Ninty students at Central make up the class of 2020. Ainslee's father Paul Button said it was great to see all of them celebrated.

“We were very thankful that they were able to put together something for the kids. It’s a great rite of passage to graduate from high school and go off into the world. We’re just glad they were able to get together and celebrate together," Paul said.

School Principal Shel Hanser said he was proud of the ceremony that came together to honor the students. He said the Class's attitude throughout the end of the year was inspiring.

“I’m in awe of them. This was never about ‘poor us.’ This was about being together and celebrating each other and helping others. That’s what it’s all about. When you can do that, (graduation) is icing on the cake, honestly. These are great kids," Hanser said.