Residents on Silver Lane in Billings, change outside habits after mountain lion sightings

BILLINGS- There’s an additional warning for Billings residents living in the area of Montana State University, Billings after a second mountain lion is spotted on Thursday.

MSU Billings sent out a public safety advisory saying a university employee reported the sighting near the intersection of Virginia Lane and Silver Lane at approximately 8:45 a.m.

She lives on Silver Lane and although she hasn’t seen the mountain lion,  she’s heard it’s been hanging around her house.

“Watch your kids,” she said. “I see a lot of people walk these streets.”

This is the second time the cat has been spotted in this neighborhood, Back in mid-July MSU Billings Chancellor, Dan Edelman captured the mountain lion crossing in front of his driveway on some surveillance cameras. 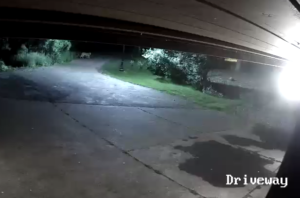 Brook Murphy who also lives on Silver Lane, says he usually walks to his job at the hospital, but recently that’s changed.

“It was about ten days ago or so that I heard that mountain lion was in the area,” he said. “So since then, I’ve been kind of driving around just not going to take a chance.”

Although the animal has been spotted numerous times, that doesn’t necessarily mean that Fish Wildlife and Parks is tracking it.

Bob Gibson with FWP in Billings said sometimes mountain lions can travel several miles a day, meaning there’s no way of knowing where it will end up.

Unless the mountain lion destroys something, Gibson said the plan, for now, is to leave the animal alone.

“Just the fact that someone started seeing them is not surprising,” said Gibson. “There are wild turkeys walking up and down the middle of Rimrock Road. There are mule deer and whitetail deer all over in there.”

And that is exactly the reason, Murphy believes the mountain lion might be hanging around on Silver Lane; turkeys.

On Thursday a group of turkeys was hanging out on the lawn of a nearby home, its a sight  Murphy and other residents, keep an eye on.

“It’s the canary in the mineshaft,” said Murphy. “I just keep an eye on them and I’m like, if they’re still there, I’m like yeah we are good.”

Gibson also said, if they do find the roaming mountain lion, wildlife officials will be forced to euthanize the animal.

He says unlike bears, there’s no way to relocate a big cat.

A family living on Walden Place, which is just off Rimrock Road who said their four chickens were killed from what they believe was a mountain lion.

Gibson said FWP has not received a report about that yet.