On Friday, A 17-year old girl from Anaconda had the honor of singing the National Anthem at the opening ceremony.

Madison Lodell was one of five chosen by music professionals and then won an on-line contest for the honor. 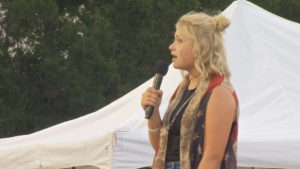 She has sung at her school’s games, but this was even more special.

Lodell started singing when she was two years old.

“It’s pretty special,” said Miranda Liedle, Madison’s mother. “She’s been doing this her whole life, It’s been a dream for her forever. And I’m excited to see her reach her dreams.

Lodell said her music teacher encouraged her to sing at high school games.

“She pushed me to do the national anthem at my school games,” Lodell said. “I didn’t really want to at first but she told me I had the voice for it and so I started doing it and I fell in love with it.”

“This is pretty big,” said Liedle. “She wants to get her name out there and she’s really something special. So I’m excited to see where she goes with this.”

“It’s heartwarming just because it’s the national anthem,” Lodell said. “It’s my country so I think it’s an honor to sing it and it’s just all-around exciting.”

“It’s such an honor,” Liedle said. “My grandfather actually just passed in April. He was a vet. And so we have a lot of respect for the people here that fight for America and we’re very proud to be here.

Retired U.S. Army Sergeant Dana Bowman, who is a double amputee, parachuted with an American flag into Daylis Stadium before the National Anthem.

Lodell has more dreams and says she will be auditioning for American Idol in September.

She will be a senior at Anaconda High School.