BILLINGS- In south Billings, the Yellowstone River has taken part of a home and land from a neighboring trailer park.

The family that owns the home wants to repair and stabilize the land that’s eroded underneath, but they also need the neighbor to fix his land.

“You never know what the Yellowstone is going to do,” said Jolene Borg, who owns a home on Mullowney Lane with her husband, Joel. “It’s a free-flowing river.”

The Yellowstone River has changed course and is still threatening the Borgs’ home.

“It is very, very scary,” Borg said. “You don’t know if your house is going to be there. Part of the house has gone in. That is our hot tub room. A greenhouse before. Basically, a dirt floor, so the dirt fell into the river along with the half of the wall.” 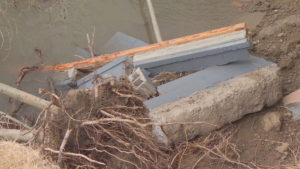 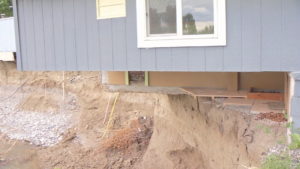 Before the river took part of the house, it took the Borgs’ land.

“When we bought this house, it actually has three acres right now. We’re probably on a little under three-quarters of an acre,” she said. “So we have the rest of it on the other side of the river.”

They have all the permits in place to do the repair work. An engineering firm estimated repairs of the whole site, including the Borgs’ property and the trailer park, would cost $270,000.

The Borgs’ repairs alone would cost close to $70,000. However, that work wouldn’t solve the problem if the trailer park owner doesn’t also make the fixes to protect his land.

“That could’ve been taken care of in 2015,” Borg said. “He had the permit but he didn’t want to spend the amount to get it fixed. It is very frustrating just to know that it could be fixed.  It just breaks my heart that we have to deal with this now as it is.”

For now, the Borgs feel fairly safe but they do want to take care of the repairs before the runoff next spring.

Q2 has left a message for the trailer park owner and will update this story with any comment.