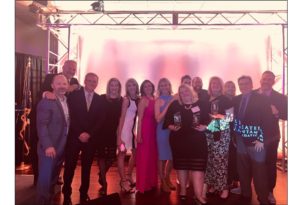 BIG SKY – The KTVQ2 crew was in Big Sky this weekend for the E.B.Craney Broadcaster’s  Association awards banquet.

Q2 won the best newscast in Montana as well as best television website and best commercial production in the state.

“This honor is shared by our entire news team who work hard each day to bring relevant local news to our region,” said Jon Stepanek, Q2 News Director.