One of the main concerns was water pollution from the proposed development on 116 acres near Oscar’s Dream Land.

Those living close to the land for the proposed gravel mine had a chance to ask questions to representatives from the Department of Environmental Quality, the Department of Natural Resources and Conservation, the Army Corps of Engineers and Yellowstone County. 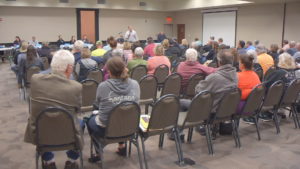 Developers FirstMark Materials also gave answers and plans on putting in two ponds when it is finished with the open-cut mining.

Now the DEQ is looking at the proposal to determine if it will issue an open cut mining permit.

“There’s quite a number of things we will be looking at,” said Paul Driscoll, DEQ public information officer. “Of course, water quality is a big issue in Montana and anything that affects the quality of Montana’s water will be looked at quite closely. But we’ll also be looking at other aspects of the environment. We would have a decision to either accept the application or send it back with deficiencies to remedy or approve the application.”

The DEQ would like to have public comments by July 1 but will accept input up until July 9, when it will make a decision.