According to a post on the tribe’s Facebook page, the Pryor water system shut down Thursday when power was lost to the pumps. That led to a loss pressure in the distribution system which eventually led to water moving into the system through cracks in the pipes, breaks or joints.

BOIL YOUR WATER FOR THREE MINUTES BEFORE USING

The Pryor water system was shut down on May 16, 2019 due to loss of power to the pumps. This led to a loss of pressure in the distribution system, which may cause backpressure, backsiphonage, or a net movement of water from outside the pipe to the inside through cracks, breaks, or joints in the distribution system that are common in all water sys-tems. Such a system failure carries with it a high potential that fecal contamination or other disease-causing organisms could enter the distribution system. These conditions may pose an imminent and substantial health endangerment to persons served by the system.

What should I do?
DO NOT DRINK THE WATER WITHOUT BOILING IT FIRST. Bring all water to a rolling boil for at least (3) three minutes, and let it cool before using, or use bottled water. Boiled or bottled water should be used for drinking, making ice, brushing teeth, washing dishes, and food preparation until further notice. Boiling kills bacteria and other organisms in the water. ALL STORED WATER, DRINK OR ICE MADE RECENT-LY FROM THIS SUPPLY SHALL BE DISCARDED.
Inadequately treated water may contain disease-causing organisms. These organisms include bacteria, vi-ruses, and parasites which can cause symptoms such as diarrhea, cramps, nausea, headaches, or other symptoms. They may pose a special health risk for infants, young children, some of the elderly and peo-ple with severely compromised immune systems.

The symptoms above are not caused only by organisms in drinking water. If you experience any of these symptoms and they persist, you may want to seek medical advice. People at increased risk should seek advice about drinking water from their health care providers.

What happened? What is being done?
The Tribe failed to pay their bill to the power company. The power company shut off power after trying to get payment for one month. We are working to get the bill paid.
We will inform you when you no longer need to boil your water. For more information, please contact Crow Tribe Water Resources Department at (406)638-1017 or P.O. Box 159 Crow Agency, Montana 59022.
Please share this information with all the other people who drink this water, especially those who may not have re-ceived this notice directly (for example, people in apartments, nursing homes, schools, and businesses). You can do this by posting this notice in a public place or distributing copies by hand or mail.
This notice is being sent to you by __Pryor Water System_____
Water System ID#: 083090012
Date distributed: _5/17/2019_

This update was posted Friday morning: 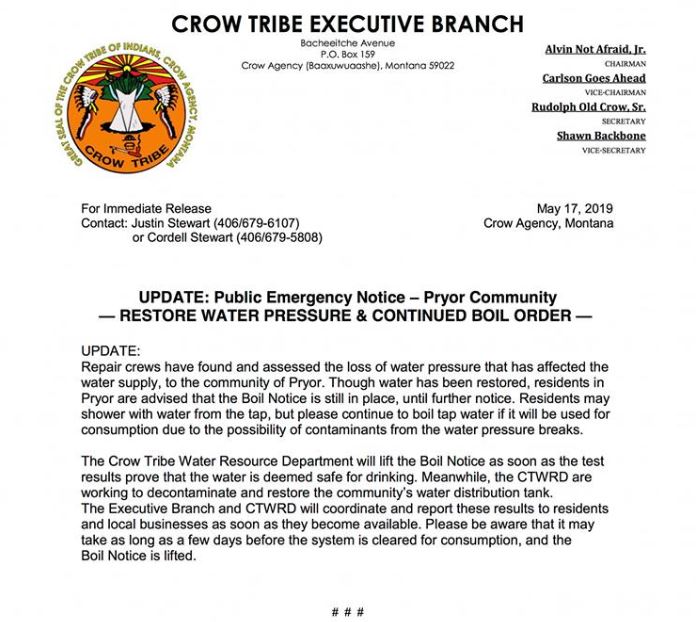